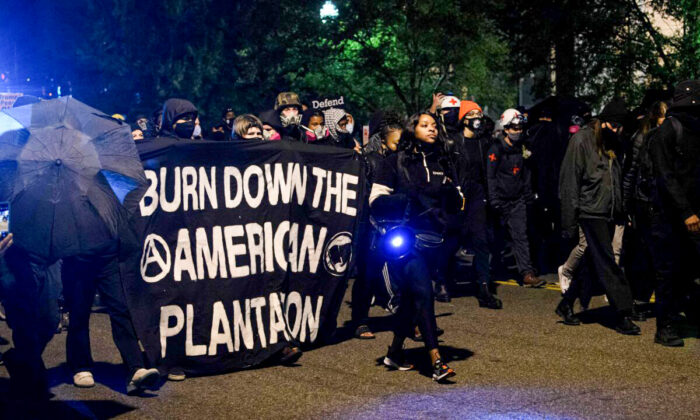 “I call on you to condemn the leaders of the ‘Candle Light Vigil for Democracy’ planned for today and to ask members in your caucuses to cancel their planned support for this event,” Hawley told Schumer and Pelosi in a Jan. 6 letter.

“The organizers behind this event have a history of engaging in extremist tactics to interfere with workings of democracy. During a week where you have vociferously condemned those who tried to obstruct congressional proceedings last January 6th, you must also be similarly willing to call out leftist activists who have also engaged in criminal acts to interfere with democracy.”

The group Hawley was referencing is known as ShutDownDC, which describes itself as a group organizing “strategic direct action to advance justice and hold officials accountable.”

Hawley told Schumer and Pelosi that the group “was founded by Antifa activists who promised to ‘burn down the American plantation.’ It is led by Liz Butler and Patrick Young.”

“These individuals and Shut Down DC have engaged in calculated, unlawful harassment campaigns against many government officials, including Senator [Lindsey] Graham, Senator [Rand] Paul, and White House Chief of Staff Ron Klain,” the letter reads. “They promoted rioting during former President Trump’s inauguration in 2017, when, according to news reports, rioters vandalized vehicles, smashed windows, set a limo on fire, and injured police officers.”

The Epoch Times asked ShutDownDC for a response to Hawley’s claims, but none was received as of press time.

Hawley’s letter to the two Democratic leaders isn’t the first time that he has tangled with ShutDownDC. In 2021, demonstrators protested outside of Hawley’s suburban Virginia home in an incident that Hawley described in his letter as harassment of his wife and infant child.

“When she asked them to leave, they screamed threats through bullhorns, vandalized property, trespassed, and physically shoved a neighbor who asked them to stop,” the letter reads. “Patrick Young called that a ‘candlelight vigil.’ The State of Virginia disagreed. He was charged with — and pled to — criminal trespass.”

Among the House Democrats scheduled to speak at the event were Reps. Jamie Raskin (D-Md.), Andy Kim (D-N.J.), and Pramila Jayapal (D-Wash.), according to Washingtonian.

“Elected officials should not partner with Liz Butler and Patrick Young or the groups they lead. If in fact you truly believe that attempts to interfere with democracy should be condemned, then you must break from your past silence and begin condemning those actions when they are committed by the left. It is imperative that you ask members of your caucus to shun groups like Shut Down DC and to cancel their plans to speak at their event,” Hawley told Schumer and Pelosi.

Hawley included in his letter a lengthy condemnation of what he called Democrats’ “deafening” silence when Antifa and Black Lives Matter demonstrators staged hundreds of violent demonstrations throughout summer 2020 that resulted in the deaths of nearly two dozen people, injured hundreds of law enforcement personnel, and destroyed billions of dollars worth of private property.

“When it comes to political violence and criminal obstruction of government by the left, the silence by Democrats has been deafening. Democrats looked the other way when Antifa rioters torched a federal courthouse in Portland,” Hawley wrote.

“They did the same when left-wing rioters in Seattle seized power from a democratically elected government and tried to secede by creating a breakaway anarchist zone. And they did the same when hundreds unlawfully trespassed into the Senate to disrupt the nomination process of Justice [Brett] Kavanaugh and then tried to breach the Supreme Court in an attempt to prevent Justice Kavanaugh from taking his oath.”

Spokesmen for Schumer and Pelosi couldn’t be reached for comment.