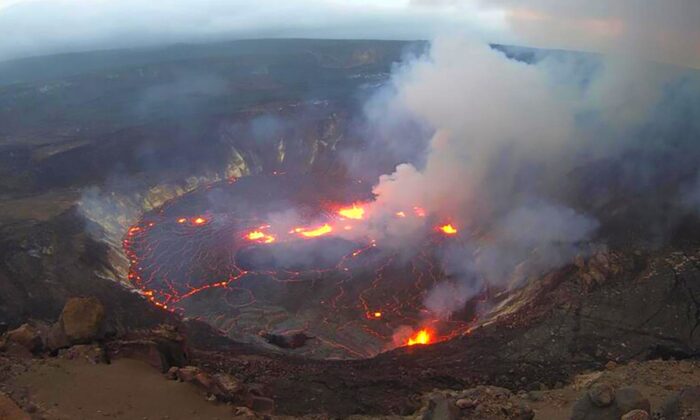 This webcam image provided by the United States Geological Survey shows a view of an eruption that has begun in the Halemaumau crater at the summit of Hawaii’s Kilauea volcano on Sept. 29, 2021. (USGS via AP)
US News

The most active of five volcanoes that together form Hawaii’s Big Island was erupting in “full swing” late on Sept. 29 after a series of earthquakes and ground swelling was detected earlier that same day, the U.S. Geological Survey (USGS) confirmed.

Hawaii’s Kīlauea volcano is “in full swing,” the agency said on Twitter. “What was once a cooling lava lake is now a new fissure eruption!”

The U.S. Geological Survey Hawaiian Volcano Observatory (HVO) said in an observatory that webcam images of the Halema’uma’u crater indicated that an eruption began on Sept. 29, at 3:42 p.m. local time.

Pictures shared by the volcano agency showed lava fountains covering the floor of the crater and billowing clouds of volcanic gas rising into the air.

The HVO has elevated  the alert level for Kīlauea from “WATCH” to “WARNING” and its aviation color code from “ORANGE” to “RED” as the  new eruption and associated hazards are evaluated, the USGS said.

According to the USGS website explaining alert levels, the latest change in level and color code means that an explosive eruption is “underway or suspected with significant emission of volcanic ash into the atmosphere.”

Before..and..After! #Kilauea #volcano summit #eruption is in full swing. What was once a cooling lava lake is now a new fissure eruption! https://t.co/ZIxSFKk70V

The eruption is not in an area with homes and is entirely contained within Hawaii Volcanoes National Park. Kīlauea is located at the heart of the park and is one of the most active volcanos on Earth.

“All signs indicate that it will stay within the crater,” said Ken Hon, the USGS scientist in charge of Hawaii Volcano Observatory. “We’re not seeing any indications that lava is moving into the lower part of the east rift zone where people live. Currently, all the activity is within the park.”

Hawaii Volcanoes National Park spokesperson Jessica Ferracane said the national park is still open at this time and there are no road closures. The area that is erupting is not close to where people can hike or drive.

Ferracane added that officials are expecting tens of thousands of visitors to flock into the park and that people need to be very careful in terms of natural hazards.

“This eruption is going to draw many people to the park, we’re already seeing people come into the park, drive-in after dark tonight,” she said.

Kilauea had a major eruption in 2018, with lava flowing through numerous vents along the flank of its cone. The 2018 eruption lasted over four months and destroyed more than 700 homes and displaced thousands of residents.

During those several months, Hawaii suffered some 10,000 tremors and many major quakes. In early June, a USGS official said that the Kilauea volcano in Hawaii experienced 500 earthquakes in one day.

Over the four-month period, Kilauea spewed enough lava to fill 320,000 Olympic-sized swimming pools, burying an area more than half the size of Manhattan in up to 80 feet of now-hardened lava.