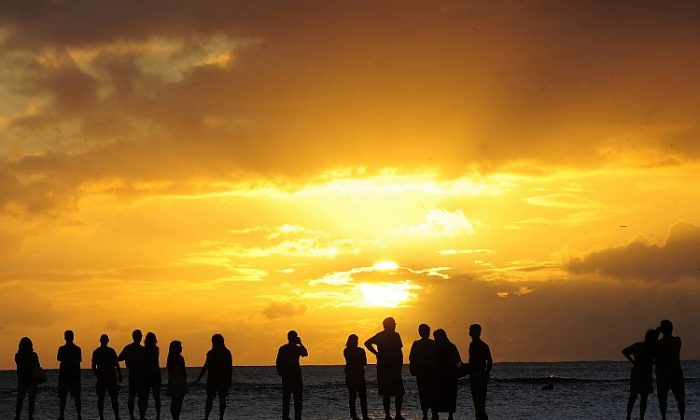 People gather to watch the sunset from Waikiki Beach in Honolulu, Hawaii, Nov. 10, 2011 in this file photo. Hawaii scored the highest rating on a U.S. Wellbeing index and is also America’s favorite state (Emmanuel Dunand/AFP/Getty Images)
US

Hawaii, home to sun, surf and, well, President Barack Obama, has scored the highest rating on a U.S. Wellbeing index and is also America’s favorite state; California, also home to sun, surf, and Hollywood, rather than presidential, glitz, is the most disliked state according to two recent polls. Those results, however, can change according to your political persuasion.

California was one of only five states that polled negatively in a Public Policy Polling (PPP) survey conducted from October 2011 to mid-February this year.

Illinois, New Jersey, Mississippi, and Utah were the other four lowest states, gaining between 25 to 32 percent in unfavorable ratings, but the Golden State took the trophy with 44 percent of those polled saying they liked it least.

Hawaii was a clear winner, gaining 54 percent out of the top 10 most popular states. Colorado came in second with 44 percent.

When the political persuasions of the 3,300 Americans surveyed were factored in however, Hawaii remained the most favored but California’s status changed.

Democrats liked California more than Republicans by 91 points, and disliked Texas, Alabama, and Mississippi the most. Republicans meanwhile loved Alaska and Texas (by more than 82 points than Democrats) but loathed California.

A Gallup Poll published yesterday goes someway to explain the PPP results: Hawaii gained the highest well-being rating in the nation during 2011.

Scoring a top of 70.2 on the Gallup-Healthways Well-Being Index, Hawaii has taken out the title for the third year in a row.

Hawaii scored the most on the Emotional Health and Healthy Behaviors Indexes, the Gallup report noting, “Hawaiians were the most likely to say they smiled or laughed a lot ‘yesterday’ and the least likely to report daily worry or stress and to have ever been diagnosed with depression.”

Southern states, many with the highest foreclosure rates, accounted for half of the 10 lowest well-being scores, with West Virginia residents registering the lowest at 62.3.

Massachusetts scored the highest on access to basic necessities, which included financial support for food, shelter, and medicine; a safe place to exercise; and satisfaction with community.

Mississippi came in last in this category, as it had last year.

North Dakota workers reported the best work environments in the country, the Work Environment Index measuring qualities like “a trusting and open work environment” and the right for an employee being able to work to his or her own strengths.

While Alaska was in the top five on the Well-Being index, California and Texas were unremarkable, both coming in midway.

Californians have showed little reaction to their most disliked status on the Internet although one blog, democraticunderground.com, chimed-in saying “Perhaps, then, California should be dumped into the sea by an earthquake!”

In defense of America’s most populous state, the site gave a link to the U.S. Department of Agriculture website saying: “To hell with the $1.9 trillion in GDP and $37.5 billion in food that they produce, including HALF of the nation’s fruits, nuts and vegetables. America can do without all of that!” adding as an afterthought “Actually, no they can’t.”