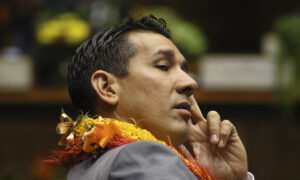 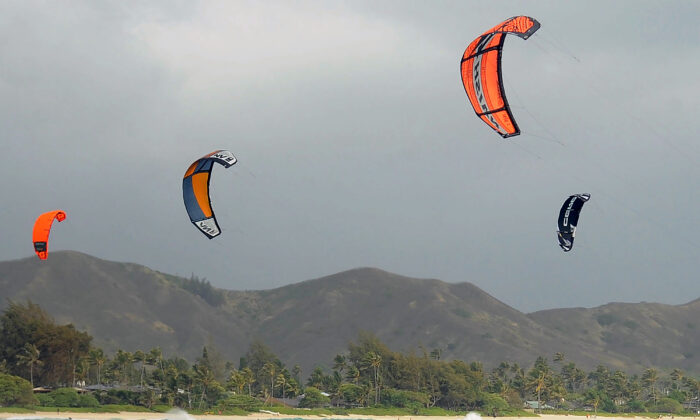 Kite surfers enjoy increasing winds ahead of Hurricane Douglas in the windward town of Kailua on the island of Oahu, Hawaii on July 26, 2020. (Ronen Zilberman/AFP via Getty Images)
US News

Hawaii Reopens for Tourism for First Time in Months

Hawaii is letting tourists bypass the 14-day mandatory quarantine it put into place earlier this year, marking the reopening of the state to tourism.

As long as people get tested for COVID-19 before traveling to Hawaii, they can forgo the quarantine period as of Oct. 15, authorities said. Some will face mandatory post-travel testing, including travelers to the Big Island, while others will be encouraged to take tests several days after arrival.

About 8,000 visitors reportedly flew into the state on Thursday.

Gov. David Ige, a Democrat, this week extended his emergency declaration through Nov. 30 but carved out the exception for tourists in a bid to add money to the state economy, one of the hardest-hit in the nation by the COVID-19 pandemic.

The new order “does provide for the exception for pre-travel testing for those who can get a negative test 72 hours prior to departure to be exempt from the quarantine,” Ige told reporters at a press conference.

COVID-19 is the disease caused by the CCP (Chinese Communist Party) virus. Hawaii implemented some of the harshest measures in the United States in March to try to curb transmission of the virus.

Job losses in the state, which is comprised of over 100 islands in the Pacific Ocean, piled up. Some 150,000 jobs have been lost during the pandemic, according to Lt. Gov. Josh Green.  The unemployment rate for Hawaii reached 12.5 percent in August, the fourth highest in the nation, according to the U.S. Bureau of Labor Statistics.

“We’ve learned to manage the spread [of the virus] much better, but our people have suffered. And it’s time to give our people some hope for their economic future, which is closely tied to their health. So what we’re talking about today is opening our state to travelers, and we have to do it with great discipline,” Green said at the briefing.

Tests will only be accepted from a list of partners the state has on its website. Children under 5 are exempt.

People who land and have not been tested before travel must quarantine for 14 days.

Hawaii reported just 91 new CCP virus cases on Thursday and just 104 people were in hospitals on Monday for treatment for COVID-19.

But authorities urged people to social distance, wear masks, and take into account other public health advice and requirements if traveling to Hawaii, even if they test negative, to prevent a surge in new cases and hospitalizations.

John DeFries, the director of the Hawaii Tourism Authority, said in an ideal scenario, every Hawaiian would be vaccinated against the CCP virus for the tourism market to reopen.

“That perfect scenario, however, is not realistic. And we clearly don’t have the capacity to do that. And so every scenario short of that looks and feels imperfect,” he told reporters, adding that people in the industry are both excited and anxious.

Tourism officials have been assured that there are enough hotel rooms to handle the expected number of tourists in the coming months.