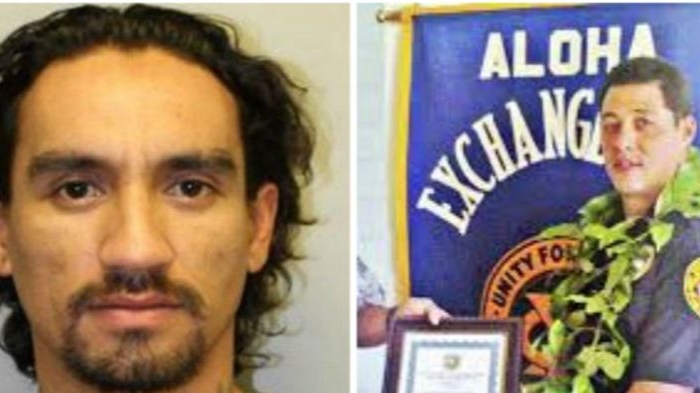 Police in Hawaii are searching for a suspect who shot and killed an officer during a traffic stop on Tuesday night.

The Hawaii Police Department said that officers conducted a traffic stop on a vehicle along Highway 11 in Mountain View, located 15 miles southwest of Hilo at around 9:47 p.m., when the driver fired several shots at officers.

Officer Bronson K. Kaliloa was shot in the neck and leg. Other officers returned fire, according to a police news release.

Justin Waiki, 33, was identified as the suspect. After the shooting, he fled into the brush on foot and eluded officers who were chasing him, police said.

The officer was taken to a local emergency room and underwent emergency surgery. He was pronounced dead at approximately 12:45 a.m. on Wednesday, said officials.

Kaliloa, who is a 10-year veteran of the police force, leaves behind a wife and three children.

The suspect is described as 5 foot 11 inches in height, approximately 145 pounds, and was last seen wearing a white T-shirt and dark colored jacket. Police consider him armed and dangerous.

A witness told Hawaii News Now that around 50 police cars and an armored vehicle responded to the area after the shooting.

“I was driving up the road and I seen lights and then I saw a lot of lights and then I pulled over to turn around, but I thought it was a car accident and I’m medically trained so I was going to offer to help,” Paul Klink told the station. “That’s when the cop pulled his gun and I realized this obviously isn’t a car accident. The cop came running around the car and I think he thought I might have been involved in it or could be. I don’t know, but he was pretty assertive about me turning around.”

People with information about his whereabouts are asked to call the police at 935-3311 or call the anonymous tip line at 961-8300.

The National Law Enforcement Memorial Fund (pdf) said that traffic stops are notoriously dangerous for police officers in the United States. The leading causes for officers being shot and killed in 2017 was when they were responding to domestic disturbances and conducting traffic stops, its annual report said.

“The leading circumstances of firearms-related fatalities were officers responding to domestic disturbances and conducting traffic stops,” the memorial fund stated.