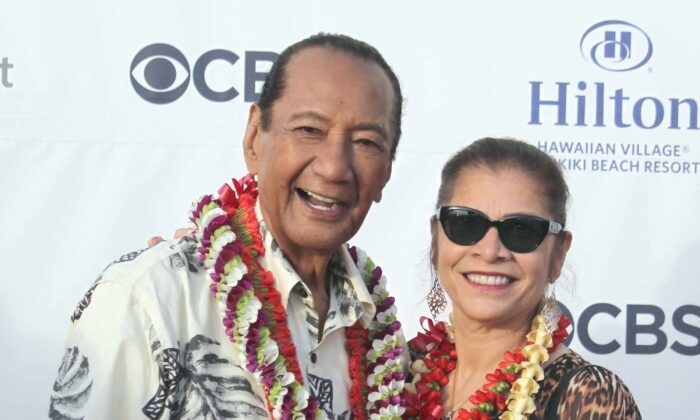 Al Harrington and Rosa Navarro-Hoffman during the Hawaii Five-O and Magnum P.I. Sunset On The Beach event on Waikiki Beach, in Honolulu, Hawaii, on Sept. 19, 2019. (Michael Sullivan/CSM/Zuma Press/TNS)
Entertainment

Harrington suffered a stroke last week and had been hospitalized, according to the Honolulu Star-Advertiser.

A high school and college football player, Harrington joined the cast of “Hawaii Five-0” in 1972, replacing Zulu, who played Kono Kalakaua, as the only Polynesian member of the team.

He had a recurring role in the “Hawaii Five-0″ remake, playing local surf shop owner Mamo Kahike, as well as other small roles, including “Scrubs,” “Forrest Gump” and “The Jeffersons.”

Eventually, Harrington returned to Hawaii, where he became a teacher and launched a second career with his dance revue show, during which he became known as “The South Pacific Man.”

In 2018, he received the Lifetime Achievement Award from the Hawaii Academy of Recording Arts.

He is survived by his wife, Rosa, sons Alema and Tau, daughters Summer and Cassi and several grandchildren.