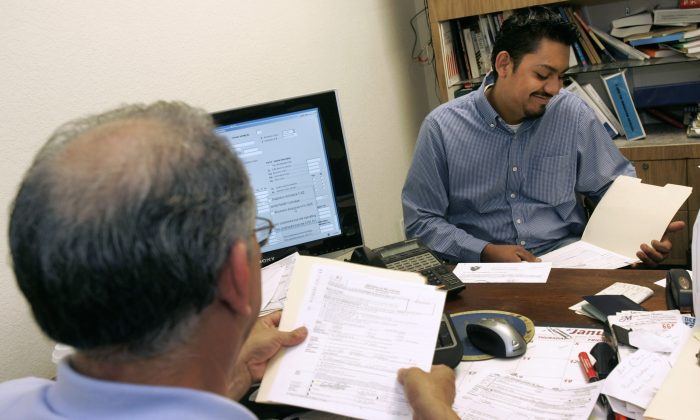 Carlos Diaz, right, looks over his tax return that was prepared by Esteban Ramirez, left, at Esteban M. Ramirez and Associates in Richmond, Calif., Wednesday, April 4, 2007. It's tax time, when millions of illegal immigrants find themselves collaborating with one federal agency - the Internal Revenue Service - while trying to avoid another - Immigration and Customs Enforcement. (AP Photo/Jeff Chiu)
US

Another shower of criticism has hit President Barack Obama’s executive order on immigration that shields some 5 million illegal immigrants from deportation. This time it’s for potentially giving them thousands of dollars as a reward for all the money they have earned illegally.

A couple of Republican politicians are objecting to giving out the tax credits to illegal immigrants, saying it burdens taxpayers.

“This program severely undermines the White House’s lip-service to enforcing the law and would increase the burden on law-abiding taxpayers,” said Sen. Ben Sasse (R-Neb.).

But half the illegal workers already pay income taxes without being able to claim most of government benefits. Wouldn’t it be fair to let them have something in return?

There are estimated 11 million illegal immigrants in the U.S. About 8 million of them work, and of those, some 4 million pay taxes, often using stolen or fake Social Security numbers to file.

The IRS accepts these tax returns without reporting the taxpayers to immigration authorities. “We treat it as taxpayer-protected information,” IRS Commissioner John Koskinen said.

Over the past decade, illegal immigrants have paid an estimated $100 billion in Social Security payroll taxes, according to Stephen Goss, Social Security’s chief actuary.

That would mean a tax-paying illegal immigrant earns on average about $20,000 a year. Of that, some $2,500 goes to Social Security and Medicare–benefits such a person cannot use.

However, because illegal immigrants usually earn so little and are statistically from larger families, they will be able to draw much more from the income tax credits–over $5,000 if they have two children and over $6,000 if they have at least three children.

With some 4 million adults eligible for Obama’s immigration order, if only one in four applies for the past tax credits, the government may have to cash out tens of billions of dollars.

Still, since applying for the tax credits requires documenting one’s income, the millions of illegal immigrants working in the underground economy would probably have trouble claiming the benefit, even if they get a Social Security number.