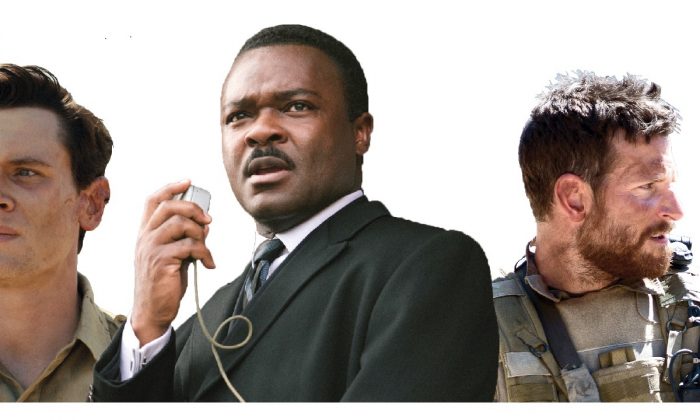 Have a Very Heavy Christmas at the Movies

NEW YORK—It used to be that come Christmas Day we could expect either Tim Allen, Will Ferrell, or Adam Sandler at the movies, dressed in green or red velvet. This year, not only do we not have a tinsel-and-Santa-suit option, but the box office also leans dark, with a heavy dose of reality.

That’s three rather in-your-face films this Christmas, an uncharacteristically high number compared to Christmas Days in the last decade. Bruce Nash explains the reasons. He’s the founder and analyst of The Numbers, a film industry data tracking website.

“All three films are really looking at the Oscars,” Nash said in a phone interview. “It might be a little of a coincidence that they’re all true stories. That’s what you’ll often see in a Oscar-hopeful film or something that captures the moment in history.”

In order to qualify for the next Oscars, a film must be shown in commercial theaters (specifically in Los Angeles County) during the 2014 calendar year. Christmas weekend is just about as late as a studio can push it and still qualify.

2. Christmas Is on a Thursday

Because Thursday is not a big opening day, instead of aiming to cash in on a one-off Christmas-themed movie, studios are playing for longevity, Nash said. All three of these films are meant to be seen well into next year.

“There’s a lack of obvious seasonal fare this year,” Nash said, speaking about the holiday season generally. “I guess ‘Annie’ fits that category. ‘Frozen’ last year fit that. There’s less this year because big studios are reducing the number of films they are making. They are focusing on tentpoles. They’re making fewer risky films.”

The Christmas lights go up the day after Halloween now, haven’t you noticed? So too do Christmas movies.

“Over time, studios moved Christmas-appropriate movies back. They started coming out in November,” Nash said. “If a film has a particular Christmas theme and is expected to play well, they will move it earlier to give maximum time to recoup the investment.”

A Decade of Christmas Day Releases

Looking back on the socially and politically-themed, based-on-true-story films releasing on Dec. 25 in years past.