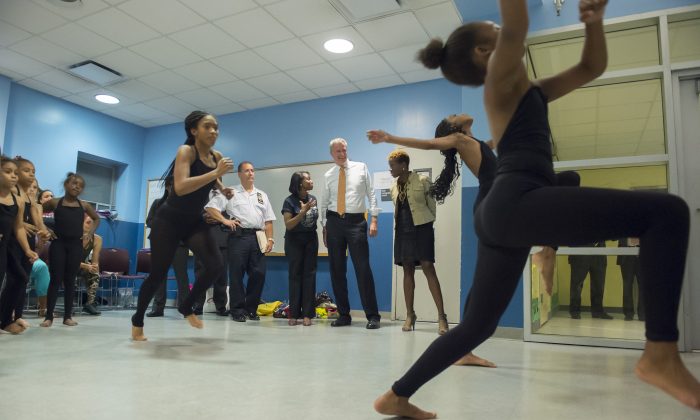 Have a Middle-Schooler in NYC? After-School Just Got Better

NEW YORK—In two weeks, close to 80,000 middle-schoolers will get the opportunity to engage in after school programs as doors will open to city children aged 11–13. Mayor Bill de Blasio set aside $145 million from general state education aid towards the initiative.

The programs, ranging from arts and sports to math, literacy, and science, are provided by 108 community organizations. Among the largest of them is the Sports & Arts in Schools Foundation (SASF), offering programs in 158 city schools, including 33 new programs this fall.

“Middle school is a tough time for students and parents alike,” de Blasio stated in a release. “We must do right by our families and ensure we’re continuously giving middle-schoolers the tools they need to succeed.”

De Blasio visited SASF training camp Monday, where some 130 after-school instructors trained for a week in preparation for the new school year.

“We are working very hard with the city to help equalize educational opportunities for all children in the critical hours when school is out,” said Ross Sandler, chairman of the SASF board, in a statement.

Much less publicized than de Blasio’s expansion of prekindergarten, one of his campaign promises was after school programs for all middle schools. Yet, as his proposal to raise taxes on the city’s rich failed in Albany, the mayor was left at the state’s mercy to fund his ideas.

He got most of the pre-K money from the state budget leaving nothing for after-school programs. In the end, he took money from the general state education aid, which had increased by $233 million in the 2014/2015 budget, bouncing back after a massive post-recession slump.

The investment is welcomed in the money-starved sector. In the past two years the state had to decline applications for $170 million worth of grants for after school services, unable to satisfy the demand.

All the city-sponsored programs are free and applications are available on nyc.gov/afterschool.