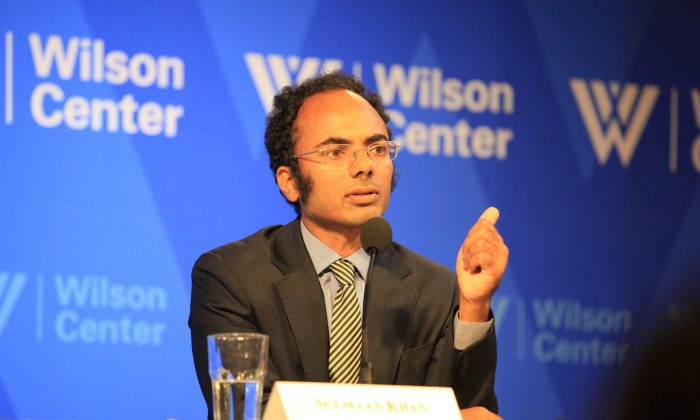 Haunted by Chaos: Insecurity is Weaved Into China’s Grand Strategies

WASHINGTON—Author Sulmaan Khan unveiled his new book “Haunted by Chaos: China’s Grand Strategy from Mao Zedong to Xi Jinping” at the Woodrow Wilson International Center for Scholars in Washington, D.C. on Sept. 24. He said that the changing of leaders in communist China hasn’t brought about fundamental changes because of a sense of insecurity, which has lingered and affected China’s decision on grand strategies.

Sulmaan Khan is a historian and assistant professor at Tufts University. He was fortunate to gain access to China’s rare historical archives while doing research for his book before the Chinese regime reclassified them.

Kahn said the reason the archives were reclassified is because the Chinese regime wants to control its people by rewriting the country’s past on its own terms.

Chinese leader Xi Jinping closed the Foreign Ministry Archive (FMA) in 2012. According to the Wilson Center, a Washington-based research institute,  the FMA “reopened in 2013 and 90-percent of the previously available documents were reclassified, and only 8,000 documents of miniscule importance remained open for research.” The FMA shutdown again in 2014 and reopened in 2016.

Khan outlined the history and grand strategy of China, from Mao Zedong to Xi Jinping, and summarized them with, “If you look at everything we’ve talked about, you’ll see the grand strategy is about basically being secure.”

The biggest problem for China, Khan said, is not Trump’s trade war, not North Korea, but the fact that the previous model of “to be strong, must have a strong economy” has reached its limit.

According to Khan, China’s economic growth has severely impacted the natural resources and the physical foundation of a state, and this has undermined China’s national security. “Chinese civilization grows around rivers. If rivers run dry, what does that mean to you? That will worry me if I were in the place of Xi Jinping, maybe, it is just a maybe, whom the Gods wish to punish,” he said.

When asked about whether there is a possibility for China to achieve democracy, Khan said, “China’s democratizing, in the terms I understand here would be, either the Party ceases to exist, or changes so fundamentally that it equates to ceasing to exist.”

Khan said that in Deng Xiaoping’s years, the motto was “being rich is glorious.” Everyone thought that there was an equal opportunity to get rich. However, later on, when people found that only a certain politically connected business group could get rich, it became much harder for them to have confidence in the system, especially when food and clean water couldn’t be ensured.

Compared to other countries, including China, Khan believes the United States is a strong and influential nation.

“If you look at the Bush administration’s national security documents, there is a bit about security there. But the overwhelming pin seems to be, ‘We will make the world safer with freedom and democracy everywhere.’ A very ambitious and far reaching strategy.”

Khan doesn’t believe that the so-called “China model” will work elsewhere. He said, “The interesting thing about Xi talking about promoting the ‘China model’ was that the moment he started it, he decided that he was going to walk it back.”