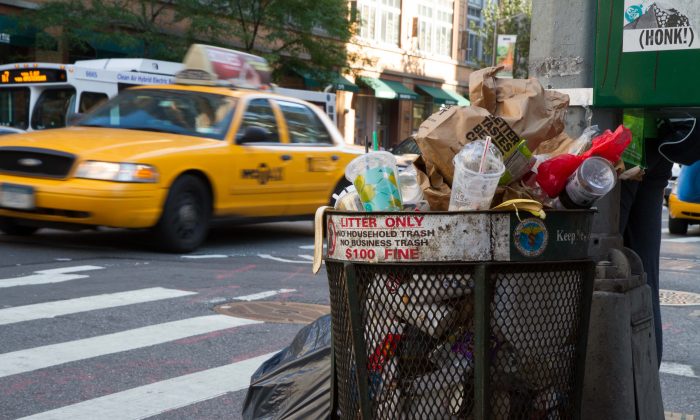 Hauling Trash in NYC for Twice the Price

Both agreements included retroactive pay raises (like many city public employees, the UFT and DC 37 had worked without contracts during the Bloomberg administration’s final years). All eyes now turn to negotiations with the city’s uniformed workforce, including the NYPD and the FDNY.

Less often thought of as a uniformed workforce, however, are the Big Apple’s 7,200 sanitation workers, who have been without a contract since 2011. The last contract negotiated by the Uniformed Sanitationmen’s Association Local 831 resulted in a 17 percent raise over 54 months for workers.

But according to a May report by the nonprofit Citizens Budget Commission (CBC), the bill for collecting and disposing of New York’s trash is already much higher than in other large American cities. Can Gotham really afford to pay more?

With a population of 8.3 million and the second-largest urban economy in the world, New York City produces lots of garbage—about 8 million tons annually—but the city’s Department of Sanitation (DSNY) is responsible for hauling only half of it. The rest is handled by roughly 250 private hauling firms, which contract with local businesses to remove commercial waste.

For starters, the private firms do a better job on the disposal side than the city does. The DSNY sends just 14 percent of the waste it collects to recycling plants, which pay for the materials they receive—up to $25 per ton for paper recyclables, depending on market variations—with most of the rest going to landfills (a small amount gets converted into energy). Private haulers, by contrast, send 63 percent of what they collect to recycling plants, lowering their disposal costs considerably.

The real difference between the public and private sector trash haulers, however, shows up on the collection side—specifically, how much those who do the collecting get paid.

City sanitation workers benefit from incentives such as “productivity” bonuses and shift-differential payments, which are rarely offered to their counterparts in the private workforce, and they get substantially more paid days off, including unlimited sick days, the CBC report found.

The benefits add up. In 2012, the average DSNY employee earned 39 percent more than the average worker at a private trash-hauling firm in the city. Total compensation for a first-year DSNY employee—including overtime, holiday pay, health insurance, and retirement benefits—tops out at over $100,000. A city sanitation worker with more than 20 years on the job earns almost $170,000 in total compensation. The DSNY’s highest-paid employee in 2013 took home $219,233, more even than then-commissioner John Doherty.

Anachronistic work rules in the sanitation workers’ contract also drive up costs. In 1980, Mayor Ed Koch managed to get the sanitation workers’ union to reduce the number of workers on every truck from three to two, in exchange for a small bonus—then just $11 per day, per worker. Thirty-four years later, that bonus remains in effect but has swelled to more than $40 per day, providing a yearly $8,300 in extra pay for each collection worker.

The CBC is one of those New York institutions that everyone regards as a straight shooter. A CBC report’s findings will often wind up as the subject of newspaper editorials or as the focus of a segment on one of the city’s many political talk shows.

So Mayor Bill de Blasio’s newly appointed sanitation commissioner, Kathryn Garcia, felt obliged to respond promptly. “A well-trained, professional workforce that performs a multitude of assignments naturally costs more than their counterparts in the private carting business,” she said in a statement. “In essence, you get what you pay for. And in NYC, we pay for and receive the highest quality sanitation services in the country.”