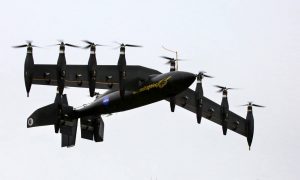 Hate Parking? This Folding Car Is Made for You

Imagine having an ultra-compact, 2-seater electric car that can self-park, slide into any spot sideways or even diagonally, and if the parking space still isn’t big enough, the car body hoists up and folds forward, shrinking from roughly 7.5 feet long to just 5.2 feet.

A team of engineers at the University of Bremen’s DFKI Robotics Innovation Center in Germany built the EO—”I go” in Latin—car to be the ultimate urban solution for congested cities with high competition for parking—cities just like New York.

The car is remarkably nimble. Each wheel has its own motor allowing it to rotate 90 degrees.

The EO can twirl on the spot, or more practically, pivot your wheels and you can drive to the curb sideways, making parallel parking about as easy as pulling up to a stop sign.

The body, especially when tilted up over the axle with driver and passenger tilting along with it, looks something like a pod from an amusement park ride or a simple transformer. (see video)

The EO is equipped with a number of cameras and scanners to give it complete intelligence on its surroundings. It has multi-lens cameras at the front and back, sensors that measure angle and speed, and 3-D environment scanners. Currently these sensors allow it to auto-park, but the plan is to make it fully self-driving in the future.

What it’s not built for is speed or distance. It tops out at 40 mph and its range on a single battery charge is only 30 to 44 miles, which means if you live in SoHo, you’d be able to drive to JFK Airport, but get one quarter of the way back.

There is already a vision for the next iteration to solve the highway driving problem: interlocking cars. A “platoon” of cars would link up like a daisy chain, pooling power and allowing all but the lead car to relax and enjoy the ride. It could also accommodate cargo pods and extra battery cells. The team even imagines it being a new form of mass transit or rideshare, where you could hook into a convoy.

The current EO prototype is driving well but no word yet if folding cars will ever make it to the streets of Manhattan, where conceptually they’d find a willing market, as long as someone solves the problem for all electric cars in the city—how to recharge the battery from an alternate side parking spot.