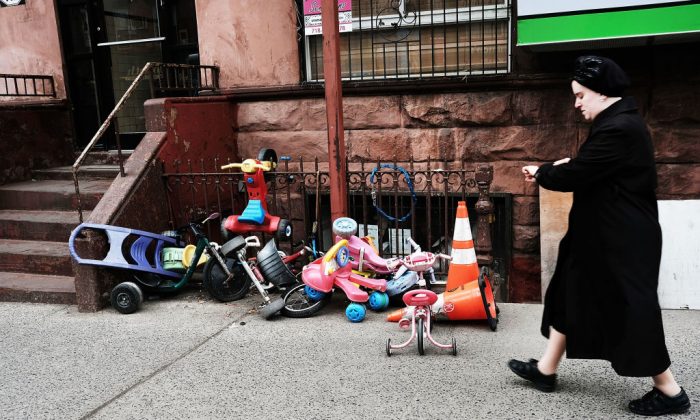 A Hasidic woman walks through a Jewish Orthodox neighborhood in Brooklyn, N.Y. on Apr. 24, 2017. (Spencer Platt/Getty Images)
Crime and Incidents

The latest crime figures released by the New York Police Department on Nov. 7 reveals a rise in hate crimes during October, particularly against the Jewish community.

“At this moment, there’s a lot of hatred out there. There is too much hatred out there,” said New York Mayor Bill de Blasio at a press conference at the Museum of Jewish Heritage on Nov. 7.

In an incident four days earlier, a group of young people were caught on surveillance camera in Brooklyn throwing a pipe through a synagogue window. Footage also showed the same group hitting off a hat worn by a 14-year-old Hasidic boy, and later pushing a 10-year-old girl to the ground.

A synagogue in Brooklyn was also vandalized with anti-Semitic graffiti on Nov. 1, less than a week after a gunman killed 11 people inside the Tree of Life Synagogue in Pittsburgh, the largest attack against Jews in U.S. history. A 26-year-old Brooklyn man was arrested in relation to the vandalism.

Two men were also recently arrested for drawing swastikas on the steps and garage doors of several homes in Brooklyn on Oct. 30.

So far, crimes against the Jewish community have accounted for just over half of the 309 reported hate crimes this year. This represents a 22 percent rise from the same time last year. About three-quarters of those crimes were vandalism involving swastikas, reported CBS.

“Increased reports of swastikas concern us and other criminal mischief here in the five boroughs absolutely concern us,” Police Commissioner James O’Neill said. “None of it, none of it, will ever be tolerated in New York City.”

Thomas Galati, NYPD Chief of Intelligence, said the force’s Hate Crimes Task Force works closely with the FBI and inter-state counterparts in its efforts to track and investigate hate groups, including white supremacists and neo-nazis, and individuals.

“We have been investigating a lot of these groups for the past several years,” he said. “We know who we need to watch, and we are watching them.”

On Nov. 3, the African Burial Ground National Monument in lower Manhattan, a historic site for the black community, was defaced with threatening racist graffiti. No arrests have been made in relation to this incident.