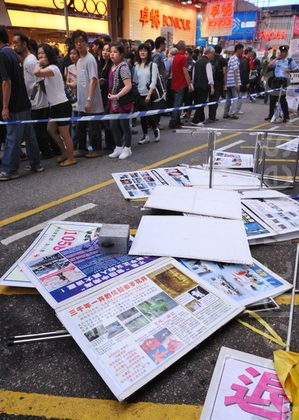 HONG KONG—Acts of intimidation in broad daylight on the streets of Hong Kong have challenged whether the city’s freedoms will continue to protect opposition to the Chinese Communist Party (CCP).

At different times on the afternoon of Saturday, Nov. 13, first one and then another mainland Chinese man attacked and smashed an outdoors table and banner display belonging to the Global Service Center for Quitting the Chinese Communist Party and also assaulted a staff member. Both attackers were arrested by police.

The assaults took place in the bustling center of Hong Kong’s Sai Yeung Choi Street in the neighborhood of Mong Kok. At the Global Service Center tables attacked by the men, Chinese are invited by Falun Gong practitioners working as volunteers to renounce their memberships in the CCP or its affiliated organizations—such renunciation is called “tuidang” in Chinese.

Ms. Ye, an eyewitness, said that some time after 12 p.m., a man in his 30s or 40s, dressed in a camouflage uniform, walked up and started kicking down the display boards, turning over tables, and hitting Mr. Hong, one of the volunteers, in the chest. The man kept kicking and swearing in Cantonese until the police arrived and stopped him.

Police later confirmed that the man is from mainland China.

Around 3 p.m., another man came and kicked down the newly restored tables and display boards.

Ms. Wang Yafei, a Falun Gong practitioner at the scene, said she immediately rushed towards him and asked him not to destroy things, but he refused to listen.

“The gangster pushed down all the racks, pushcarts, and display boards,” she said. “After doing these things, he still stayed there without being afraid, indicating that he didn’t fear the police or being arrested.”

Wang said there was another man with him, who stayed at a distance. “I guess he was an agent dispatched by the CCP,” she said.

When police arrived to question and arrest the man, he told them in Cantonese, “I did it just for a little benefit.”

Meanwhile a large crowd had gathered, wanting to know what went on, with many of them expressing solidarity with the Falun Gong practitioners, saying that Hong Kong protects freedom of speech.

One onlooker told the police to be sure to arrest and charge the man, and put him on a trial, because the CCP covers for these people, and they dare cause destruction wherever they go.

“They are not just targeting Falun Gong,” he said. “No one is allowed to say anything bad about the CCP. This is not an isolated event, it’s like this with everything.”

The attacks in Mong Kok are the second time this year that Global Service Center booths have been targeted in Hong Kong. In June a bus of school children from mainland China were driven by their teachers to four different Service Center sites and instructed to vandalize them with stickers and markers. https://www.theepochtimes.com/n2/china-news/markers-and-stickers-used-to-deface-hong-kongs-freedoms-57144.html

The violence on Saturday in Mong Kok reflects the ongoing conflict between the Chinese regime and Falun Gong practitioners.

Falun Gong is a spiritual practice that involves doing five sets of meditative exercises and living according to the principles of truthfulness, compassion, and tolerance. In the spring of 1999 an estimated 100 million Chinese had taken up the practice, according to Chinese officials at the time.

The Chinese regime began an extensive, systematic, and deadly persecution of Falun Gong in July 1999. According to the Falun Dafa Information Center, hundreds of thousands of Falun Gong practitioners are detained at any one time and tens of thousands are believed to have been killed by torture and abuse.

At the end of 2004, the practitioners added a new tactic.

The tuidang movement began after The Epoch Times published in the fall of 2004 an editorial series called “Nine Commentaries on the Communist Party,” which provides an uncensored history of the nature and crimes of the CCP. The tuidang movement seeks to peacefully dissolve the CCP.

The Global Service Center was established early in 2005. Staffed by volunteers who are primarily Falun Gong practitioners, it helps people renounce the CCP via the Internet, hotlines, faxes, mail, and in person.

Inside mainland China, owning a copy of the “Nine Commentaries” is considered a crime and the regime has mounted different campaigns seeking to stamp out the tuidang movement. Nonetheless, according to the Global Service Center, over 105 million Chinese have renounced the CCP.

Inside Hong Kong, the Global Service Center has booths or tables at popular tourist spots all around the city and has had great success in reaching people from mainland China there.

Kan Hung Cheung, spokesperson for the Hong Kong Falun Dafa Association, said he has urged local Hong Kong authorities to fully target these violent events, to fully investigate them and arrest the people who are really behind all this.

The Hong Kong authorities must get to the bottom of this, in order to protect Falun Gong practitioners and their regular peaceful events, he said.

Legislative Councilor Leung Yiu-chung said the recent violent events should give the Hong Kong government cause to reflect.

Leung said because the Hong Kong government has constantly pressured groups with different views and pro-democracy groups, it has emboldened them [the CCP thugs].

“If the Hong Kong government doesn’t take care of it, it will definitely cause more problems,” Leung said.