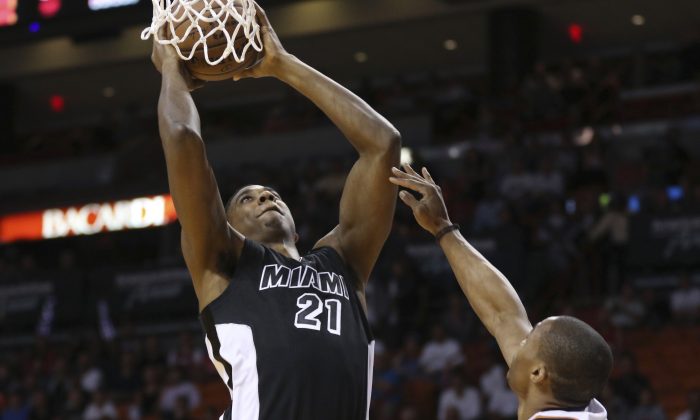 Hassan Whiteside Gets Unusual Triple Double in Win Over Bulls

Miami Heat center Hassan Whiteside recorded an unusual triple double on Sunday afternoon in a win over the Chicago Bulls.

Whiteside, playing in just his 38th game in the NBA, had 12 blocks along with 14 points and 13 rebounds.

The 12 blocks set a franchise record, and is also a season-high across the league.

Triple doubles are relatively rare in the NBA, and they are usually for points, rebounds, and assists. The last triple double with blocks came from Joakim Noah in February 2013.

“I just came out, I’m just trying to win every game. I got great teammates and trying to get a win very night,” Whiteside said on the ABC broadcast after the game.

“I tell my teammates, they can step up their pressure a little more and I got their back.”

“He plays big, and we’re a much better team when he plays in there because he’s protecting the rim,” said Dwyane Wade. “He’s nasty down there.”

Hassan Whiteside going to work on another team that could’ve given him chance this season, the Bulls. No one wanted to trust him full time.

Okay, what’s the deal with Hassan Whiteside morphing into a circa ’01 Marcus Camby? Seriously?

Hassan Whiteside — the dude has just crushed the Bulls. All day.

#HEATWin! @YoungWhiteside earns a triple-double (14/13/12) to lead your @MiamiHEAT to a 96-84 victory over the Bulls. pic.twitter.com/oVg9Pna3vi

Whiteside also played just 24 minutes in the game, after he was listed beforehand as questionable due to a sprained ankle. It’s the shortest time that a player recorded a triple double since Russell Westbrook last season.

Whiteside, 25, is one of the surprises of the middle of this season, because the Heat obtained him from the NBA’s D-League.

The former Marshall University player was selected by the Sacramento Kings in the second round of the 2010 draft, but was cut by multiple teams including the Kings and Los Angeles Clippers.

Whiteside is averaging 7.4 points, 5.8 rebounds, and 2 blocks per game in 17 appearances thus far this season.