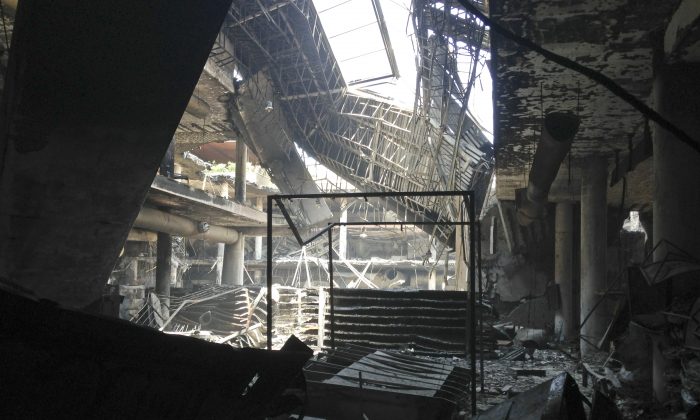 The remains of the Nakumatt supermarket in the Westgate Mall in Nairobi, Kenya Tuesday, Oct. 1, 2013. Kenyan President Uhuru Kenyatta says Kenya will keep its troops in Somalia to help that country's beleaguered government battle the armed Islamic extremist group al-Shabab, which attacked the mall in Nairobi on Sept. 21 claiming at least 71 lives. (AP Photo/Jason Straziuso)
Africa

Hassan Abdi Dhuhulow, a Norwegian, Suspected of Being One of Westgate Mall Attackers

Hassan Abdi Dhuhulow, a Norwegian citizen, is believed to have been involved in the attack on Westgate mall in Nairobi, Kenya last month.

Dhuhulow was spotted on CCTV footage from the mall, sources in Kenya and Norway told BBC.

While it was first thought that between 10 and 15 attackers were involved, footage shows only four.

Dhuhulow was born in Somalia but he and his family moved to Norway as refugees in 1999.

One relative told BBC that he left for Somalia in 2009, and made infrequent phone calls to his family.

In the last phone call, he said that he was in trouble and wanted to return to Norway.

The relative, seeing Dhuhulow on the CCTV footage, said: “I don’t know what I feel or think… If it is him, he must have been brainwashed.”

A former neighbor of the family in Norway said that Dhuhulow got into trouble as a teenager.

“He was pretty extreme, didn’t like life in Norway… got into trouble, fights, his father was worried,” said Morten Henriksen.

Kenyan officials didn’t comment on the matter, but said previously they believe that a man known as Adan Dheq, also known as Hussen Abdi Ali, was one of the attackers.

A man named as Abdi Hassan Dhuhulow–appearing to be the same person–was freed in a trial over the murder of a Somali journalist, according to the National Union of Somali Journalists.

While one Al-Shabab fighter was found guilty of the journalist’s murder, the court freed Dhuhulow, who was accused of assisting in the plot to kill the journalist, because of a lack of proof over Dhuhulow’s alleged role.

Al-Shabab, which claimed responsibility for the Westgate attack, said it was because Kenyan troops are encroaching into Somali territory.

71 people were killed in the prolonged strike against the Westgate mall, including children, and the attackers.