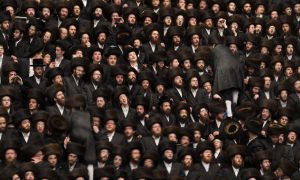 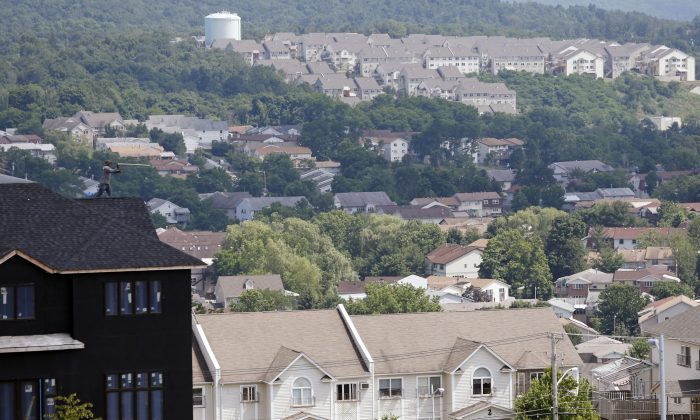 Now a petition to expand the densely settled village by annexing 507 acres of leafy lots nearby has heightened tensions with some suburban neighbors. While expansion could help a village bursting at the seams, there are fears it would lead to unwanted increases in apartment complexes, homes, and traffic.

“The quality of life here will be completely destroyed,” said John Allegro, standing on his family’s wooded 1.5-acre lot, which he said would be semi-circled by annexed land. Allegro said he moved farther from New York City to escape that kind of hubbub.

Kiryas Joel was founded within the town of Monroe in the mid-1970s by members of the Satmar sect seeking a more tranquil setting than Brooklyn, about 60 miles south. Men here wear black suits with brimmed hats, and women dress modestly. Marriages come early and families are large, which has helped the population grow from about 12,000 in 1994 to around 22,000 now. An average of more than two babies are born here a day.

Multifamily apartment buildings, many three stories tall, are packed into the 1.1-square-mile village to keep up with the growing population. Village trustee Jacob Freund said that in one area, 180 families live on 3 acres, a density he worries is unsafe.

“When you come over here in two years, you’ll see 200 units,” Freund said this week on a drive through the village, pointing to an undeveloped patch. “This is the last parcel in the village.”

Some of the Satmar locals live just outside the village, where more restrictive zoning typically requires a single-family home to be on at least 1.5 acres. A number of these out-of-village residents signed a petition requesting that their land become part of the village. An environmental review of the potential effects must be conducted before the village and the town could consider the residents’ petition, which was filed Dec. 27, 2013.

A group of residents called United Monroe, which includes Allegro and others, has been raising alarms about the landowners’ annexation request, much of it covering undeveloped acres. They argue looser village zoning could usher in a new wave of high-density development that will stress sewers, hurt air quality, and create a “dramatic change in the rural landscape.”

“The reality is that it changes everything, fundamentally,” Monroe resident Michael Egan said.

The annexation issue arose amid friction in other Orthodox populations in the region, and after Kiryas Joel separately challenged zoning restrictions in neighboring Woodbury.

Freund insists villagers are trying to live in peace and follow the customs of their ancestors. “Because we’re looking different, they’re fighting us,” Freund said. Similarly, Kiryas Joel school superintendent Joel Petlin said that while the village generates heated debate, officials elsewhere in the county quickly passed resolutions supporting proposals for large casino resorts and allowed the expansion of the nearby outlet mall.

“For shopping, for uses that they’d like, for casinos, they don’t seem to have the same analysis for traffic, they’re not as concerned,” he said.

United Monroe chairwoman Emily Convers said she’s frustrated that critics’ complaints are dismissed as bigotry. The issue isn’t hate, she said, but abuse of the democratic process by a politically influential village.

Kiryas Joel voters have proved to be a disciplined bloc who can be helpful to elected officials. In November, Harley Doles beat Convers for supervisor for the town of Monroe with overwhelming support from Kiryas Joel. In one election district, Doles received all but one of the 826 votes cast for the office.

Doles said he is not beholden to the bloc and the annexation process will play out according to state law, which requires the environmental review. Whether that review will be led by the village or the town is a politically charged decision being considered by Gov. Andrew Cuomo’s administration’s Department of Environment Conservation.

Still unclear is how a lengthy process Doles compared to a “political hot potato” will play out, especially if there’s litigation. The only certainty for the village is more babies.