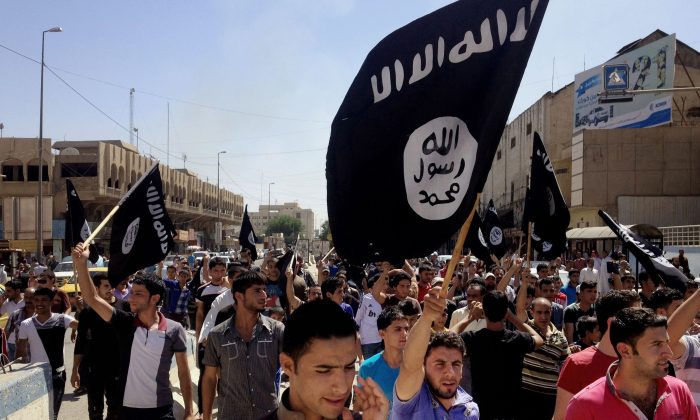 Hasan Edmonds and Jonas Edmonds, both American citizens from Illinois, were arrested Thursday for attempting to carry out an attack for ISIS, U.S. officials said.

According to the U.S. Department of Justice, Army National Guard Specialist Hasan Edmonds, 22, was arrested at Chicago Midway International Airport. He was trying to fly to Egypt.

His cousin, 29-year-old Jonas Edmonds, was arrested at his home in Aurora, Illinois. Both are from the area.

“As alleged in the complaint, in late 2014, Hasan Edmonds came to the attention of the FBI.  The investigation subsequently revealed that he and Jonas Edmonds had devised a plan for Hasan Edmonds to travel overseas for the purpose of waging violence on behalf of ISIL,” the DOJ says. ISIL is another term for ISIS, the Islamic State in Iraq and Syria.

” Hasan Edmonds, a current member of the Illinois Army National Guard, planned to use his military training to fight on behalf of ISIL.  As part of their plans, Hasan Edmonds booked airline travel to depart yesterday from Chicago and arrive in Cairo today, with layovers in Detroit and Amsterdam,” it adds.

“As alleged in the complaint, both defendants also planned for Jonas Edmonds to carry out an act of terrorism in the United States after Hasan Edmonds departed.  In particular, both defendants met with an FBI undercover employee and presented a plan to carry out an armed attack against a U.S. military facility in northern Illinois, an installation where Hasan Edmonds had been training.”

Assistant Attorney General Carlin, in a statement, said the two “plotted to attack members of our military” in the U.S.

“Disturbingly, one of the defendants currently wears the same uniform of those they allegedly planned to attack.  I want to thank the many agents, analysts, and prosecutors who are responsible for disrupting the threat posed by these defendants,” Carlin said.

Meanwhile, Italian police said Wednesday they have dismantled a ring of Islamic extremists in Italy and Albania who recruited fighters for the Islamic State group, arresting three people and issuing a warrant for a fourth who is already in Syria.

One of the suspects, a 20-year-old Italian of Moroccan origin, purportedly authored an Italian-language IS propaganda booklet for potential Italian jihadis that was published online, police said.

The 64-page booklet “The Islamic State, a reality that wants to be communicated,” describes the security and well-being living under the Islamic State but also the ruthlessness with which the group treats its enemies, a police statement said.

Police said the two others arrested were Albanian: One man was arrested in Albania and his nephew in Turin. Albanian police identified the uncle as Alban Elezi, 38, and said he was arrested on an Interpol warrant from Italy.

Italian police said the Albanians had targeted a young Italian of Tunisian origin as a potential recruit, and that Elezi had travelled to Italy to bring him on board.

Police said the three suspects were in touch, via Facebook and telephone, with another Italian of Moroccan origin who is among the 65 “foreign fighters” that Italy has traced to Syria.

Police said a warrant was also issued for that man, identified by the ANSA news agency as Anas El Abboubi. He had been arrested by Italian authorities on terrorism-related charges in 2013.