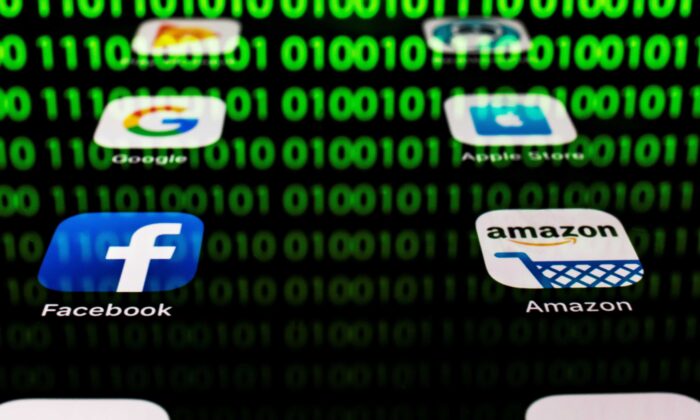 The apps for Google, Amazon, Facebook, Apple with the reflexion of a binary code are displayed on a tablet screen in Paris on April 20, 2018. (Lionel Bonaventure/AFP via Getty Images)
Business Columnists

Has the Market Been De-FAANG’d?

Wall Street loves acronyms nearly as much as the United States military, so it was inevitable that some wag–reportedly CNBC stock picker Jim Cramer–came up with “FAANG” to mean Facebook, Apple, Amazon, Netflix, and Google somewhere around 2013.

Of course, the FAANG acronym is now obsolete, given that Facebook has become “Meta” and Google has become Alphabet. Still, the average investor, analyst, and broker knows what you mean when you use the acronym, much like Kleenex has become synonymous with facial tissue.

FAANG today has come to mean the largest tech companies. But “the largest” is always disputable. Some argue that Netflix doesn’t belong among them. Some say MicroSoft should go. But there is little doubt that it is the tech companies–the growth stocks–that have driven much of the NASDAQ market growth–and markets generally–since the 2008 Financial Crisis.

But looking at the history of the market in light of the current U.S. economy, as markets endure inflation, and particularly in a rising rate environment, it seems the markets will go flat, with only minimal returns now that the “new car smell” of the tech giants seems to have worn off.

For example, from March 1975 to March 1995–twenty years–the Wilshire 5000 Index returned an average of just 6.9 percent per year, but that was critically offset by rampant core inflation, as seen in this chart. Real returns on the Wilshire 5000 only started rocketing up in the early 1990s, as the internet started coming into its own, allowing the growth of the FAANGs.

But there doesn’t seem to be that level of innovation today. Thirty years after the fact, the FAANGs are mostly mature companies. With the strong growth we’ve seen in the last three decades they are likely largely played out, like an oil well that has stopped gushing and now requires pumping. The total addressable markets are mostly saturated for these now mature stocks, with revenue growth coming mostly at the margins and largely from obsolescence—the 2.0’s, 2.1’s, etc.

And that saturation happened some time ago. More recent “growth” in shares of the FAANGs has come largely from a Federal Reserve policy that perpetuated ZIRP–Zero (and near zero) Interest Rate Policy–far longer into the future than it should have, leaving investors’ money little choice of where to go other than equities. (Indeed, some investors have gone to the nebulous, unregulated, crypto/NFT market because they recognize the bubble in the FAANG shares and there has been so little technical innovation elsewhere.)

So where is the next level of exceptional growth?

We expect it in four areas: mobile apps, transports, and augmented reality.

We would look, first, to relatively new mobile app start-ups that are already available for further innovation downstream. Urban Sitter, for example, is an app that originally allowed for parents to select babysitters who have been screened for criminal records and been reviewed by parent peers, has already expanded to elder care providers, dog walkers, housekeepers, the like.

One can easily imagine the Urban Sitter underlying technology being advanced so as to include doctors, attorneys, accountants, stock brokers, personal bankers, IT providers, and other professionals–and to earn revenue streams from both subscribers and providers.

Urban Sitter is privately held by an array of private equity players. Like Uber, it will likely go public when its market has been expanded.

Additional mobile apps in financial and medical services should all be part of the innovation investors should monitor.

As the “Baby-Boom” generation of truckers retire, the dearth of replacements for those workers clearly has helped affect the supply chain shortages Americans have suffered.

One of the hardest parts of being a trucker, though, is the time spent from home and family. It’s one of the reasons so few younger people have entered the labor force.

We suspect that before “AI” truck driverless trucks come online, some innovator will integrate GPS and location data so that truckers can work within a few hours radius of their homes to drive from home with one load and go toward home with another, say four to five hours in each direction, rather like a modern-day Pony Express.

This would also speed delivery times because cross-country deliveries could be kept in transit veritably from the time of sent to the time delivered, a departure from traditional cross-country trucking where workers rest up overnight.

While Virtual Reality (“VR”) requires immersion into an entirely virtual world, and is likely to remain in the spectrum of entertainment and electronic games, Augmented Reality, or AR, supplements the real with the virtual, as any PokemonGO player can attest.

But in business, manufacturing, and services business, AR would seem to offer enormous potential for efficiencies, precision, and waste reduction. Imagine a monocle-like device, connected by WiFi, whereby workers could measure items precisely and instantaneously or could see the stock of raw materials and calculate their re-stocking point and automatically process the order by an eye movement, similar to the way theoretical physicist Stephen Hawkings was able to write text on his computer. Or imagine sports venues, airlines, and secure facilities being able to check the bona fides of ticket holders and other authorized personnel using facial recognition in their AR monocles.

Technology is always advancing. While the markets have been largely “de-FAANG’d,” smart investors will keep apprised of technological developments to see where technology is at any given time–or invest in funds that do–and invest accordingly. The next “Apple”–the next Big Thing is awaiting your investment.