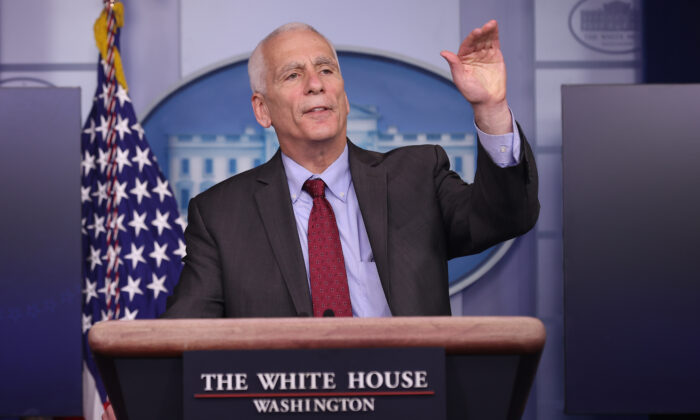 Jared Bernstein, a member of the White House Council of Economic Advisers, has admitted that inflation might not have hit its highest level yet.

In an interview with Saleha Mohsin, senior Washington correspondent for Bloomberg News, Bernstein was asked about the inflation situation. “I’ve seen folks say that the peak is behind us. I’m just going to be a lot more cautious than that,” Bernstein replied, according to a tweet by Mohsin on Aug. 30. “I certainly understand the rationale of where they’re coming from … There are still uncertainties.”

In an interview with CNN a few weeks back, Bernstein said that American families expressing concerns about recession and high prices “often have pretty decent balance sheets” and are “out there spending at a decent clip.” He also insisted that many Americans are confusing high inflation with the economy being in a recession.

In July, Bernstein admitted that inflation was “unacceptably high” while speaking during a Fox News program. Roughly a year ago, President Joe Biden said that no serious economist thought the United States would enter a period of uncontrolled inflation.

When questioned about how the White House got the issue wrong, Bernstein blamed the matter on “some unforeseen things,” specifically the Ukraine conflict.

“Ukraine and Russia are both breadbaskets and energy baskets for the world … Those have put considerable upward pressure on prices,” he said. However, inflation has been a pressing issue far before the Russia–Ukraine conflict.

According to data from the U.S. Bureau of Labor Statistics (BLS), the 12-month Consumer Price Index, which measures annual inflation, was only 1.4 percent in January 2021 when Biden became president.

By year-end 2021, CPI had jumped to 7 percent, an increase of five times in a single year. When Russia invaded Ukraine in late February, CPI was 7.9 percent. Inflation then peaked at 9.1 percent in June and was at 8.5 percent as of July.

In an interview with CNBC, Steve Hanke, a professor of applied economics at Johns Hopkins University, pointed out that inflation will remain high due to “unprecedented growth” in money supply that began when COVID-19 began two years back. He predicts the inflation issue to continue through 2023 and probably into 2024.

“The problem we have is that [Fed Chair Jerome Powell] does not understand, even at this point, what the causes of inflation are and were,” Hanke said.

“He’s still going on about supply-side glitches … He has failed to tell us that inflation is always caused by excess growth in the money supply, turning the printing presses on.”