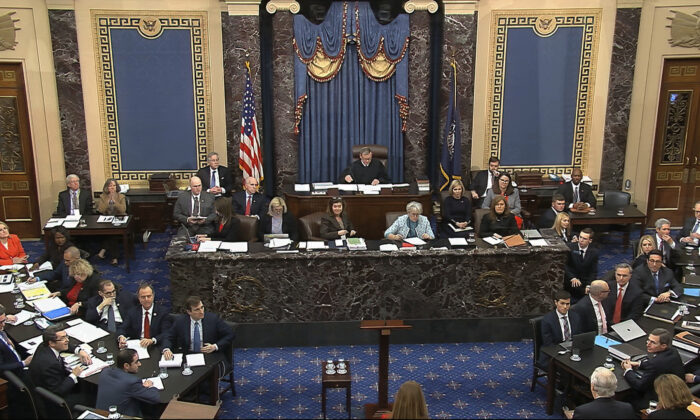 In this image from video, the Senate chamber during the impeachment trial against President Donald Trump in the Senate at the Capitol in Washington on Jan. 28, 2020. (Senate Television via AP)
Viewpoints

Has Impeachment Had Its Day?

Impeachment had its day long ago in Britain.

Given that President Trump was in the House investigation refused the minimal rights guaranteed every accused in every U.S. criminal trial and given that no one seriously expects a conviction, some may well be wondering whether impeachment has also had its day in the United States.

Keeping impeachment is, however, at least as constitutionally important as keeping the Electoral College.

Any weakness in impeachment is not constitutional, it is political, any solution being for the electorate.

So why is impeachment so important in just one part of the Anglosphere?

The mother Anglosphere entity which emerged in the 1688 Glorious Revolution was, as the Baron de Montequieu described it, a republic in the guise of a monarchy.

In accepting the throne, William and Mary effectively agreed to the terms of the Bill of Rights and to a unique separation of the executive, legislative, and judicial powers. According to the philosophers most respected by the American founders, Baron de Montesquieu and especially John Locke, the result was that the English were liberated as very few then were.

Unfortunately, a subsequent monarch, George III, did not share William and Mary’s wisdom and foresight. When the American colonists lauded him as their potential saviour from mundane politicians who, unlike Pitt and Burke, did not accept that they were ready for dominion status, George III failed to rise to the challenge. Had he, the United States could have become the center of an even greater Commonwealth. Instead, he answered their pleas with force.

Paradoxically, the Americans’ subsequent hard-won independence proved to be no paradise on earth. It was a governmental and economic disaster, with the GDP falling by a calamitous fifty per cent.

That changed views about the need for a strong executive. So more than a decade after the Declaration of Independence, a mainly new generation of Founders, equally influenced by the philosophical republicanism of Locke and Montesquieu, came together in a convention to design a constitution worthy of what was and still is, an exceptional nation.

Like the Declaration, the result was magnificent, inventing modern federalism and separating the three co-equal powers. Only to placate the anti-federalist opposition, and ensure the union, it was amended to incorporate a bill of rights, in several respects based on the English.

Preferring a one-man presidency, based on Hamilton’s assessment of the English monarchy, elected for a term, a crucial issue was what to do if he were ever to commit a ‘high crime’, that is a crime against the people—a serious violation of public trust and not necessarily a criminal offence. They agreed that for such an offence, ‘Treason, Bribery, or other high Crimes and Misdemeanors’ a president might be impeached by the House in a trial before the Senate.

The principal differences from English impeachment were that he could only be convicted with the concurrence of two thirds of senators present and no penalty, other than removal, would apply. This did not prevent a subsequent criminal prosecution.

So why then did impeachment become obsolete for the British who had long used this to exercise some control over ministers and others appointed by the King?

The reason is that having established the separation of the three powers in the Glorious Revolution, the pragmatic and non-doctrinaire British chose to modify this when it suited them.

Now no constitution separates the three powers perfectly, with even the American placing some constraints on the President’s executive powers, e.g., that the Senate must consent to treaties and ministerial and other appointments. Similarly, it places a major constraint on the legislature through the presidential veto which can only be overridden by a two thirds vote in both houses.

With the decline of a monarchy exercising political power, by the 1830’s the British had abandoned the separation of the executive and legislative powers. Under what was the emerging Westminster system, a convention emerged that a government must have the confidence of the House. Impeachment thus became pointless.

Ironically, the first example of a British government resigning on the loss of a vote of confidence followed their defeat in the crucial 1782 Battle of Yorktown by the French and the Americans. It took fifty years for this to develop into a universally accepted convention.

The Westminster system spread to the self-governing colonies with Australia, far more than any other country a child of Britain and the United States, nevertheless consciously preferring this on Federation. But with the principal parties in recent years controlled by cabals of powerbrokers, proceedings in the Australian lower house have been reduced as they have not been in London to little more than a predictable and poorly choreographed Punch and Judy show.

None of the Anglosphere Constitutions is perfect but the weakest aspect of the American is certainly not impeachment. Rather it is the abuse of the judicial power which the British model had long ensured against until it was vandalised by the Blair government, as so cogently demonstrated during last year’s Brexit prorogation.

Until the brazen invention of a non-existent constitutional right to abort, the worst example of this abuse in the United States was the 1857 pro-slavery Dred Scott decision, which arguably triggered the Civil War.

By assiduously appointing judges who are known to prefer to apply the Constitution as it was originally intended, President Trump is correcting this. A particular related problem comes from forum shopping among inferior local federal courts to obtain politically inspired nation-wide injunctions to stop some legitimate act of the administration, most recently against illegal immigration.

Apart from this, the United States is by far in a healthier constitutional position than the UK and certainly Australia.