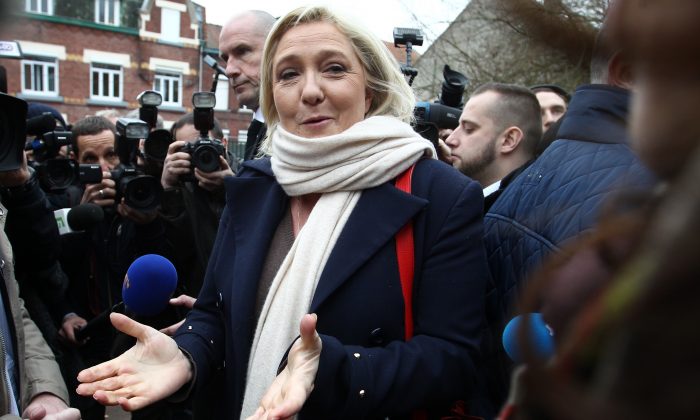 Has France Really Seen the Back of the National Front?

A week after finishing in first place in the first round of the French regional elections, leading in six regions, the National Front (FN) finds itself in control of … none, while the right-wing Republicans secured seven, and the Socialists five. The “system,” as party leader Marine Le Pen likes to call it, has done its job.

And yet the far-right party can take a great deal of satisfaction from the second round. Its final total of 6.8 million votes is an improvement of 700,000 on the first round, and 400,000 more than it won at the 2012 presidential election.

The old tactic of ‘republican defense’—when left and right put their differences aside to block the path of enemies of the republic—has worked once again.

The old tactic of “republican defense”—when left and right put their differences aside to block the path of enemies of the republic—has worked once again and largely explains the 10 percent rise in turnout. French Socialist voters in particular have mobilized in response to the “no passeran” appeal by Prime Minister Manuel Valls, whose own family fled Franco after the Spanish Civil War, to vote tactically for the center-right.

Meanwhile, the Republicans’ Nicolas Sarkozy underlined that never in his long career has he stigmatized FN voters, that he understands them and has tried to cajole them back.

In both the Nord-Pas-de-Calais-Picardie and in Provence-Alpes-Côtes d’Azur, Marine Le Pen and her niece, Marion Maréchal-Le Pen, failed in their head-to-head contests against the Republicans.

Meanwhile, in the Grand Est, where the left-wing list leader’s refusal to stand down seemed to offer the real possibility of success to Mme. Le Pen’s “bras droit” Florian Philippot, the latter ultimately could not coax any more votes out of the woodwork. In the other three regions where the FN led, the parties of the left rallied to win.

And even despite its impressive overall showing, for the time being, the FN will not even be able to be much more than a noisy nuisance.

The system sets aside one-quarter of seats in the assemblies for the winning list. Only then does proportional representation (using a highest remaining average) come into play. Thus, while Le Pen won 42 percent of the vote in the Nord, her list takes only 54 of the region’s seats to the Republicans’ 116.

For the Socialists, on the other hand, the results are little short of a miracle. Their only disappointment is that Claude Bartolone narrowly lost the Ile-de-France to Valérie Pécresse, 42 percent to 44 percent, with the FN taking the rest. That hurts because the region includes Paris, which the left still holds—and it’s worth pointing out that the right has won the regions where two-thirds of the population live.

France Just Had a Political Earthquake, and It Looks Good for the Kremlin

But however miraculous, the results pose a problem all the same. For some within the party, they point to the need to establish a more formal relationship with the Greens and the “left of the left,” while others insist on the need to hold a more reformist line until the end of President François Hollande’s term, when he or the next presidential candidate goes to the country on the basis of his record.

The divisions on the right are the same and different. For Nicolas Sarkozy, the results vindicate his refusal to stand aside for the left, but to “reach out,” as he puts it, to FN voters—the very ones, lest we forget, we all thought he had “brought back” to the Republic in the 2007 election, when his tough line on immigration and security won him the presidency and pushed Jean-Marie Le Pen into a distant fourth.

Sarkozy aims to build on the second round to consolidate his position as the leading challenger for the Republican primary in 2016. His opponents within the party, Alain Juppé and François Fillon, are insisting that the first round needs much closer analysis and thought. Both will now try to build their reputations as magnets for more moderate electors.

The FN is, of course, deeply disappointed. For Le Pen, it was a victory for “globalists over patriots,” but it’s also worth asking whether she really wanted to personally take control of a regional assembly with so little time to go until the presidential election.

In terms of her position in the party, she will be relieved her poster-girl niece failed to upstage her with a win in PACA and pleased with the performance of Philippot, who’s controversial among longtime FN members but has become the party’s major policy thinker.

Above all, the “system” has worked against her—and by the same virtue, she will claim, against the French people. Even when she loses, she wins.

She has a point, of course. No one can ignore the fact that in the first round, the one that all analysts use to provide them with “authentic” electoral data, the FN emerged as the “first party of France” despite the low turnout.

Irrespective of the second-round results, the FN had already won once. Behind all the frustrations and setbacks, there are now plenty of FN bums on regional seats. And that matters when it comes to running a presidential campaign.

Paul Smith is an associate professor in French and francophone studies at the University of Nottingham in the U.K. This article was previously published on TheConversation.com