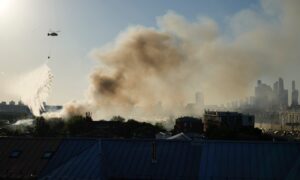 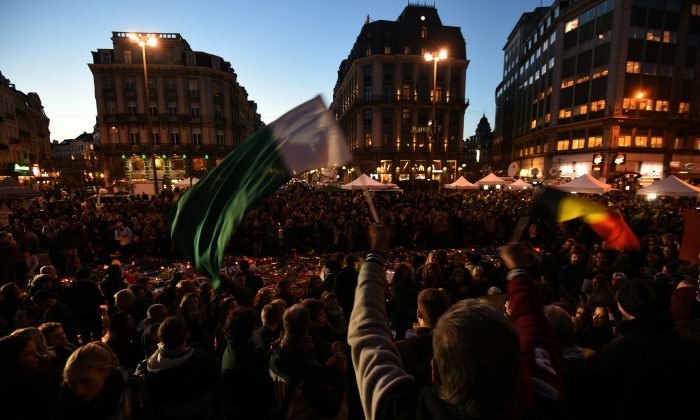 People gather to pay tribute to the victims of the Brussels attacks on the Place de la Bourse (Beursplein) in central Brussels, on March 25, 2016, three days after a triple bomb attack, which responsibility was claimed by the Islamic State more than 30 people and wounding 300 others. (Patrick Stollarz/AFP/Getty Images)
Europe

KYIV, Ukraine—The terrorist attacks in Brussels so far have produced an internal evaluation of Belgium’s intelligence and law enforcement missteps, rather than the escalated airstrikes on Islamist targets in Syria that quickly followed the deadly attacks in Paris.

Two days after the Nov. 13, 2015, terrorist attacks in Paris, French warplanes hammered the Islamic State, or ISIS, encampments and facilities in Syria.

Days later, a French aircraft carrier, the Charles de Gaulle, and its 26 warplanes moved into the Mediterranean, more than doubling France’s airpower in the region.

And on Dec. 3, after a contentious House of Commons debate, British Tornado warplanes launched from a base in Cyprus to hit ISIS targets in Syria. The airstrikes signaled an escalation of Britain’s air campaign, which had previously been limited to Iraq.

Following Tuesday’s terrorist bombings in Brussels, however, Europe’s contribution to the international military campaign to defeat ISIS in the Middle East took a back seat to domestic efforts in Belgium to counter the threat of ISIS militants returning from Iraq and Syria, some potentially under the guise of refugees.

Debates about the merit of airstrikes have given way to scrutiny over intelligence and law enforcement missteps before the Brussels attacks, which killed at least 31 and wounded at least 270.

“When you realize that you are losing the ability to shape things externally, there’s a natural inclination to look inward,” Robin Simcox, The Heritage Foundation’s Margaret Thatcher fellow, told The Daily Signal.

Operation Inherent Resolve—the international military coalition combating ISIS in Iraq and Syria—has the terrorist army on its heels. The Islamist group has lost about 40 percent of its territory in Iraq, according to the U.S. military.

Some have argued, however, that ISIS losing ground in the Middle East could inadvertently exacerbate the terrorist threat to Europe.

That is the alarming paradox of the U.S.-led campaign against the radical group: In the months and even years ahead, an Islamic State faced with defeat in a conventional war may pose a far greater danger to the West than when it was focused on conquering villages in the Euphrates River Valley or the hill country of Aleppo.

“IS will not be defeated on the battlefield alone,” Veryan Khan, editorial director of the Terrorism Research & Analysis Consortium, told The Daily Signal, using an alternate acronym for ISIS, also known as ISIL and Daesh.

“The propaganda alone is so entrenched, on every medium from music to film to written word, it could take decades and decades to truly debunk their version of fulfilling prophecy,” Khan added.

The Belgians based six F-16s in Jordan for nine months to conduct airstrikes against ISIS in Iraq as part of Operation Inherent Resolve. However, Belgium quietly withdrew the jets on June 30 due to budget constraints and for repairs.

As of this article’s publication (March 24), Belgium had not moved to restart its airstrikes.

Similarly, France and the United Kingdom have not signaled an escalation in their air campaigns or pushed for other nations to do so.

Germany pledged Tornado reconnaissance jets and aerial refueling planes to the air campaign in Syria after the Paris attacks in November. So far it has not signaled an escalation of military efforts against ISIS abroad.

Some contend that Europe’s diminished emphasis on airstrikes in Iraq and Syria may not reflect a broad change in counterterrorism strategy. Instead, it could signal a utilitarian analysis of the limited impact an uptick in European airstrikes would have on the overall military effort.

According to the U.S. Department of Defense, the United States has conducted 77 percent of Operation Inherent Resolve’s total of 10,962 airstrikes, with the remaining 23 percent divided among 12 other countries.

In Syria alone, the United States has conducted 94 percent of 3,626 total airstrikes.

Additionally, only the United States has the full spectrum of military assets to conduct an effective, independent air campaign, leaving many European nations reliant on joint operations with the United States or other allies.

The United States has neither signaled a change in military strategy in Iraq and Syria nor announced plans to retaliate specifically for the Brussels attacks.

Speaking to ESPN at a baseball game in Cuba on Tuesday, President Barack Obama said the Brussels attacks would not affect the ongoing U.S. air campaign and military training mission in Iraq and Syria.

Which Way to the Front Line?

French President François Hollande styled his response to the Paris attacks as a war effort comprising both military operations abroad and an aggressive domestic crackdown.

He called the Nov. 13 attacks, which killed 130 and wounded hundreds of others, an “act of war … organized and planned from the outside.”

In one marathon week of diplomacy, Hollande traveled across the globe to rally leaders in the United States, the U.K., Germany, and Russia to ratchet up their military campaigns against ISIS.

On the domestic front, Hollande declared a national state of emergency, locking down borders and authorizing the use of new intelligence-gathering measures. The state of emergency also granted French law enforcement officials wider latitude to arrest suspects, conduct raids and searches without approval from judges, and shut down mosques identified as places of radicalization.

Hollande also proposed a controversial amendment to the French Constitution that would strip convicted terrorists of their French nationality.

With the exception of a constitutional amendment, Clemmie Douchez-Lortet, a research associate at the Terrorism Research & Analysis Consortium, said the Belgian domestic response to Tuesday’s attacks largely mirrors what was done in France after the Paris attacks.

“However, it remains to be seen whether or not Belgium will launch a campaign of airstrikes on the same scale as France post-Paris attacks,” Douchez-Lortet said.

“You have to defeat ISIS in the Middle East to defeat it in Europe,” Heritage’s Simcox said:

Dismantle the caliphate, and ISIS will hemorrhage supporters, legitimacy, and influence. Yet this absolutely must be accompanied by a robust response to ISIS domestically. The two components feed off each other.

The flood of refugees into Europe from Syria and other Middle Eastern states, combined with the threat of returning ISIS militants, has many European lawmakers on edge.

Belgium’s anti-terrorism laws are under scrutiny, including rules such as a provisional ban on property searches between 9 p.m. and 5 a.m.

Cooperation among intelligence agencies is under fire as well.

Ibrahim el-Bakraoui, one of the suicide bombers in the Brussels attacks, was detained by Turkish authorities at the Syrian-Turkish border last June. He subsequently was deported to the Netherlands in July. Turkish officials said they reported el-Bakraoui to Dutch and Belgian authorities, but he was set free.

Some politicians are ratcheting up calls to close Europe’s borders and crack down on the flow of refugees.

In the United Kingdom, leaders of the U.K. Independence Party, which opposes the European Union, are pointing to the Brussels bombings as further proof that the U.K. should vote to leave the European Union during an upcoming referendum June 23.

And the perennial topic of what to do with the isolated or ostracized Muslim communities in countries across Europe is once again the topic du jour in many European newspapers and parliament floors.

“Conversations about multiculturalism, national identity, and integration have been going on in Europe for years,” Simcox said. “Everyone knows there is a problem, but few people agree upon the solution.”

According to Europol, the European Union’s law enforcement agency, an estimated 3,000 to 5,000 ISIS terrorists who fought in Syria and Iraq are at large inside the EU.

“We can expect [ISIS] or other religious terror groups to stage an attack somewhere in Europe with the aim of achieving mass casualties among the civilian population,” Rob Wainwright, chief of Europol, told Germany’s Neue Osnabrucker Zeitung newspaper in an interview.

Brussels is the headquarters of the European Union as well as NATO.

ISIS terrorists have struck six NATO countries in the past 18 months—Denmark, Canada, France, the United States, Turkey, and Belgium—but no NATO member states have yet pushed to invoke Article V.

Article V is NATO’s collective defense protocol—essentially a declaration of war—and was invoked for the first and only time in the aftermath of the Sept. 11, 2001, terrorist attacks.

According to a Congressional Research Service report in November:

The Paris terrorist attacks have raised the question as to whether the alliance’s ‘Article V’ collective defense provision—which states that an attack on one NATO ally is an attack on all—should be invoked. At present, this appears unlikely, especially given other priorities, including combating Russian aggression in Central and Eastern Europe.

Similarly, the European Union has not mounted a unified military or law enforcement response to the ISIS threat.

Differences of opinion over the acceptable limits of intelligence gathering and law enforcement operations, as well as the varying degrees by which the refugee crisis has affected different countries, have fractured counterterrorism strategies across the continent.

“The threat looks very different in Hungary and Poland than it does in, say, France and Belgium,” Simcox said. “There is no cohesive approach because Europe is not a cohesive continent.”