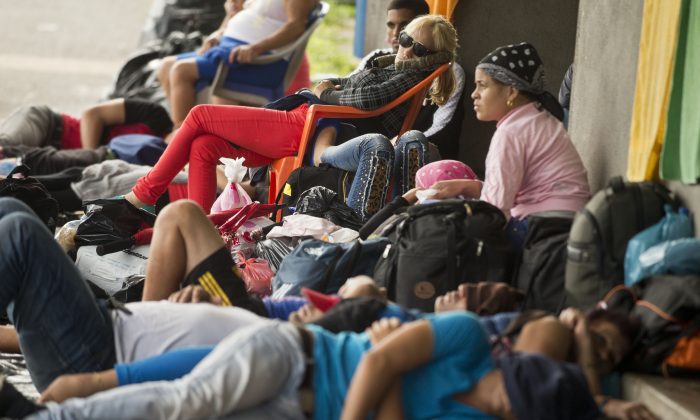 Cuban migrants rest outside the Costa Rican immigration building at the border with Nicaragua, in Penas Blancas, Costa Rica, on Nov. 16, 2015. A surge of some 2,000 Cuban migrants trying to cross Central America to reach the United States triggered a diplomatic spat between Costa Rica and Nicaragua Monday, plunging tense relations between the two countries to a new low. (AP Photo/Esteban Felix)
Opinion

A humanitarian crisis is developing in Central America along the border between Costa Rica and Nicaragua. Earlier this week, the Nicaraguan military began refusing to allow the passage of around 2,000 Cuban refugees fleeing the Castro dictatorship.

Nicaragua’s socialist Sandinista government (and close ally of the Castro regime) has even resorted to using teargas and other deterrents.

But has the Cuban government manufactured this refugee crisis in order to strong-arm the United States?

Evidence of Havana’s manipulation can clearly be seen in the magnitude of refugee flows. Cuba is a totalitarian police state, where people are not even allowed to move from one house to another without the government’s approval. So is it reasonable to believe that 2,000 Cubans got to Costa Rica without Castro’s approval?

This point is reinforced by the circumstances surrounding their departure. Vast majorities are leaving via government-owned and operated planes en route to Ecuador. State permission is also needed to fly in most cases.

This is also not the first time the Cuban government has used refugees to coerce an American government to do its will, the most notable instances being the Mariel boatlifts of 1980 and the 1994 Cuban raft exodus. Prior to each, a common thread of events is clearly seen. In both cases, the regime sought to strong-arm the United States.

The events occurring now in Nicaragua are not at all different.

The blame for this humanitarian catastrophe can then largely be attributed to President Obama’s new policy of support for the dictatorship in Havana.

Essentially, the Castro regime has been put in the driver’s seat of U.S. policy toward the island since Obama announced his new Cuba policy. The Obama administration has unilaterally granted a series of concessions at breakneck speed—without gaining anything in return from Castro.

In less than 11 months, the president has weakened our position with Cuba by giving into Havana’s demands to be prematurely removed from of the State Sponsor of Terrorism list and to lobby Congress to undeservedly lift the trade embargo.

Throughout this normalization process, the administration has stretched and arguably violated U.S. law in order to fulfill the Castro regime’s demands for normalization. Cuba’s bucket list has largely been fulfilled except for two items: removal of trade embargo and financial reparations for supposed damages caused by the United States.

The trade embargo, codified under the Cuban Liberty and Democracy Act of 1996, can be repealed only through an act of Congress. Numerous bipartisan measures from the 114th Congress clearly indicate a rejection of the president’s dangerous new policy and a certainty that the Cuban government has not met the basic conditions for its repeal.

To the chagrin of the Castro regime, concessions via executive action have plateaued. The administration’s recent vote in support of the embargo at the U.N. general assembly has also undoubtedly upset Havana. Having grown accustomed to getting all for nothing, Cuba is now resorting to an old tactic of pressuring the United States by unleashing Cuban refugees.

In response to Nicaragua’s brutality, the State Department has only insubstantial statements asking for “all countries to respect the human rights of migrants and to ensure humane treatment of individuals seeking asylum or other forms of protection in accordance with international law and their own national laws.”

Obama’s capitulation to the Castro regime has called into question the administration’s commitment to the oppressed Cuban people. Hollow press releases from the State Department are inconsequential.

Considering the protected status and many benefits Nicaraguans and their government are given by the United States, the administration can ensure a positive outcome for the Cuban refugees.

Ana Quintana is a policy analyst for Latin America and the Western Hemisphere in The Heritage Foundation’s Allison Center for Foreign Policy Studies. Copyright The Daily Signal. This article was previously published on DailySignal.com