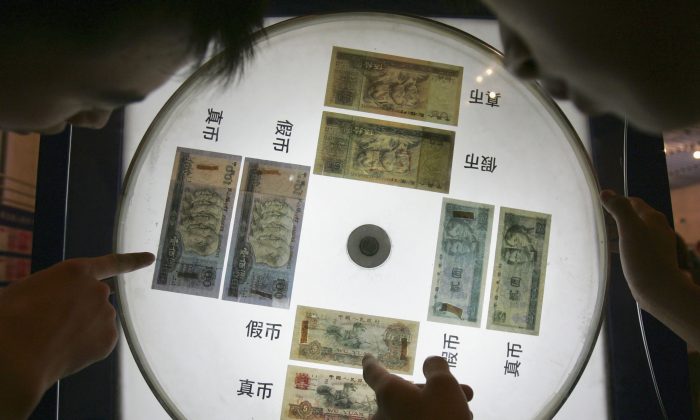 Visitors view a show window displaying yuan notes and telling visitors how to identify real and fake notes at an exhibition of the Chinese currency Yuan at the Beijing Science Museum on July 22, 2005 in Beijing, China. (China Photos/Getty Images)
News

Has China Really Been Faking It?

It is curious to see consulting firm McKinsey cheerleading for centrally planned China time and again.

This looks like a kind of anchoring bias, which colors some commentators’ view of the country–having been fed the official narrative too much.

In their analysis, the rules of economics don’t apply to China, and central planning as well as human rights problems (and a host of other problems, really), can be conveniently ignored.

This time, it’s Jonathan Woetzel of McKinsey who thinks that the centrally engineered stock market bubble, as well as the subsequent crash (including the severe repression of market forces), as well as the amateur handling of the August currency devaluation, are really nothing to worry about and are mere stepping stones during China’s continual ascent.

So he felt compelled to “challenge five common assumptions” about the current state of the Chinese economy.

Let’s look at just two of Woetzel’s challenges to these assumptions: “China has been faking it” and “China’s economy lacks the capacity to innovate.” Does he understand the bear argument correctly? And do his replies have merit?

Woetzel said: “A key tenet of the China-meltdown thesis is that the country has simply not established the basis for a sustainable economy. It is said to lack a competitive, dynamic, private enterprise structure and to have captured most of the value possible from cheap labor and heavy foreign investment already.”

China meltdown thesis? Most China bears from Fraser Howie and Gordon Chang to Jim Chanos, and including Epoch Times, do not think the mess Chinese central planning has created must result in outright disaster and a financial crisis.

Most think the country will just not grow much for two or three decades, similar to Japan after its asset bubbles burst in the beginning of the 1990s. Disaster will only come about if the current problems are mismanaged.

‘China Has Been Faking It’

Woetzel said the bears believe China “has simply not established the basis for a sustainable economy,” which is exactly what many bears say.

He makes the concession that China is still lacking in some aspects of a market economy, like “the legal system falls short of the support for property rights in advanced countries.” It actually falls short of a few other things as well, going beyond just economics like …

Instead, China is very good at things that aren’t at all market-friendly, like the persecution of market participants as well as the press. Like if people sell stocks when they should not or a journalist writes something that doesn’t please the regime.

The economic—and not so market friendly—model also has been running on endemic corruption, although the current leader Xi Jinping is trying to change it.

Yes, Woetzel is right: The private sector is on the way up and the role of state owned enterprises is declining. But why is the government still controlling the most vital sectors of the economy, like the banks, in deciding where to move the $30 trillion in credit?

As for China’s propagated reform initiatives, Woetzel is a believer. We’ll believe it when we see it. (The regime’s goals, endorsed by Woetzel, come before each colon; our comments follow.)

Yes, that’s what the bears are saying and for good reasons. Woetzel thinks China can be a powerhouse of innovation. The main problem is that we have heard this one before. Many times.

For example in the 2001 extension of the 863 program to foster high-tech development:

“It aims to accelerate the national socio-economic development, drive industrialization through informatization [sic], and enable China to approach or catch up with international pioneers in selected fields by the year 2005.”

Even if it had aimed to achieve these goals by 2015, China is still quite far from international pioneers such as Facebook, Google, Tesla, or Apple.

Woetzel thinks: “Innovation is at the heart of the success of companies in sectors adapting to fast-changing consumer needs, so digital leaders like Alibaba (e-commerce) and Xiaomi (smartphones) are emerging as top global contenders.”

Global contenders? One thing McKinsey likes to do is take a company’s revenue and compare it to global industry revenue. In that case, most Chinese companies indeed look like leaders because they make a lot of money—in China.

They cannot compete in global markets (that is, outside China) because their products lack sophistication and even private companies like Alibaba have risen to the top because they copied Western technology and had the Chinese Communist Party’s blessing.

China is second globally in R&D spending behind the United States (China spent $257 billion in 2012) and Woetzel makes the mistake of focusing on quantity, rather than returns.

In the World Economic Forum’s global competitiveness report, China only ranks 31st in innovation, so the high expenditure is rather a testimony to its chronic inefficiency.

The quantity argument also goes for his “million science and engineering graduates a year.” Yes, there are a lot of them. But are they any good? Some of them no doubt are, but most of the best are attending school in the United States. They will most likely join the millions of other Chinese immigrants staying in this country—despite China’s prosperous future.