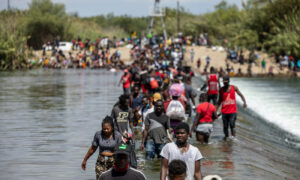 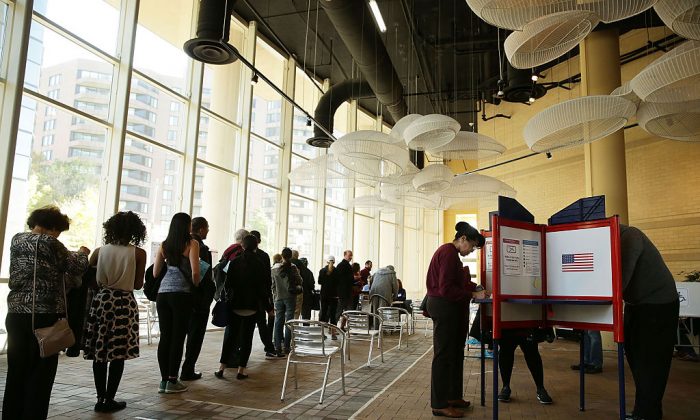 Voters wait in line to cast their ballots in a polling place on Election Day on Nov. 8, 2016 in Arlington, V.A.. (Alex Wong/Getty Images)
Viewpoints

An American socialist, working out of a Chinese university, has been supplying sophisticated voter identification data to a northern Virginia-based voter registration organization. This data has apparently been used to turn several Virginia races in favor of the Democratic Party, as part of a wider effort to influence elections across the U.S. South in favor of the Democrats.

President Donald Trump recently told the U.N. Security Council, “Regrettably, we found that China has been attempting to interfere in our upcoming 2018 election, coming up in November, against my administration.”

In fact, it seems that a major Chinese academic institution may have been involved in attempting to influence U.S. elections well before Trump took office.

Who Is Steve McClure?

Washington-area activist Steve McClure has been associated with American Maoist politics for decades. The founders of the Progressive Student Network at Kent State University, in 1980, included McClure, then of the “Revolutionary Student Brigade, Student Coalition Against Nukes Nationwide, WA Coalition against Registration and the Draft, Reston, Virginia.”

The Revolutionary Student Brigade was then controlled by a Maoist organization: the Revolutionary Workers Headquarters, which in 1985 merged with the equally pro-China Proletarian Unity League to form the still-existing Freedom Road Socialist Organization (FRSO).

McClure wrote an article for FRSO’s Freedom Road magazine in 2002 titled “Genoa: Global Justice and the End of Social Peace,” which addressed protest tactics and his experience with fellow radicals at the G8 summit, an annual meeting of world leaders.

“The entire train I came with was full of members of Tute Bianche [anarchists] and Giovani Communisti [youth branch of the Communist Refoundation Party] prepared with gas masks, helmets and other protective gear, who, upon disembarking, immediately proceeded to form up into cordons in order to join the fight along Via Tolemaide. Other groups included black blocs [violent protest tactic] as well as many people with no organizational affiliation. It was inspiring to see thousands of young Italians and others of various nationalities marching together towards police lines singing anthems of the World War II resistance such as ‘Bella Ciao’ and ‘Bandiera Rossa,’” he wrote in his 2002 article.

After working as a department store visual merchandiser for many years, McClure returned to university studies in 2005.

According to the American Herald Tribune: “After twenty years, he returned to higher education to learn cartography, Geographic Information Systems, and human geography. While studying at George Mason University, Stephen met many Chinese students and visiting professors and discovered he had a knack for editing technical and scientific papers, and in 2010 was invited to work at an international geospatial laboratory based at a University in central China.”

Since 2010, McClure has worked out of the Geography Department of Wuhan University, China.

To most efficiently target and mobilize “low propensity” but reliably “progressive” voters, McClure is using sophisticated computer modeling, developed with the facilities of a Chinese government organization. It’s difficult to imagine that Chinese authorities are unaware of his activities, or his use of state-owned property, and possibly state-funded staff, to carry out his analyses.

In 2012, McClure became an official “consultant” to the university. But apparently, McClure is not the only American socialist working in the area.

According to the Wuhan University website: “Speaking of China, Steve never attempted to conceal his genuine affection. ‘The moment I got out of the airport, I could sense the hospitality of Chinese people. Lots of people would come and talk to me, offering their help. I have never received more welcome anywhere else.’ Having stayed in Wuhan for several years, he has claimed this city as his second hometown. ‘It’s nice here. Many of the people I know from Washington D.C. are here. People go back and forth. The United States and China are connected.’”

One of the “community organizations” known to work closely with McClure is Alexandria-based New Virginia Majority (NVM), which was formerly known as Virginia New Majority. Founded and led by FRSO member Jon Liss, NVM is a voter registration operation strategically targeting mainly low-income Black, Latino and Asian-America communities across Virginia.

Liss’s goal is “to patch together a new progressive majority in Virginia.”

According to a previous version of NVM’s website: “Founded in August 2007, VNM breaks from Virginia’s old history of racism and corporate domination. We build on the best democratic traditions. … We work to create a new and modern political system. … We build power by organizing the diverse peoples of the Commonwealth.”

The NVM has signed up hundreds of thousands of new likely Democrat voters, which has turned Virginia from a reliably Republican state to leaning Democrat.

In 2013, NVM’s Facebook page boasted, “We delivered a stunning blow to the Tea Party by electing Terry McAuliffe as Governor, Ralph Northam as Lieutenant Governor and Mark Herring as Attorney General.”

Commenting on the November 2017 wave of Democratic electoral victories in Virginia, Tennessee FRSO leader Thomas Wayne Walker wrote: “This wave of victories is not just about an upsurge, but about the strategic work that helped facilitated that upsurge into electoral wins. Take Virginia—We know that Virginia New Majority has done tremendous work to engage voters at a mass scale and build progressive electoral infrastructure. … That amazing organizing is surely fundamental to the victories on Tuesday.”

How did McClure/Wuhan University make all this success possible?

In 2011, McClure wrote on his blog: “I have been recently working with Virginia New Majority to make a series of maps to inform planning for precinct walks in Virginia State house districts. It is collaborative, involving emails, exchanges of data back and forth, and Skype calls. The core data are lists of individual households by pan-ethnic census categories, geocode them. And I use a point density method to aggregate those households visually, and also aggregate the counts of households by precinct and display those numbers atop the cluster map.”

McClure also wrote in a circa 2012 blog post titled “Actionable Intelligence and Prince William County”: “In the general elections of 2008 Virginia voted democratic for the first time since 1964 with Obama carrying the state. Demographic shifts and increased voter participation rather than a shift in political allegiances account for this outcome. This demographic shift was an artifact of the dynamics of capital accumulation, uneven development and class struggle.

McClure went on to talk about the nationwide implications of his sophisticated voter identification technology.

“At the national scale, congressional voting records are converted to a set of x, y coordinates and scrutinized using hierarchical clustering, classified using natural breaks and grouped as binary categories to generate strategic insights. A selection of only Virginia Congress members are visualized, revealing the strategic importance of redistricting and civic engagement projects in light of demographic shifts linked to zoning and land use decisions on the micro-scale of local politics. The results are presented as maps and diagrams which might illuminate challenges and opportunities for organizations engaging with electoral efforts.”

The FRSO now seems intent on applying McClure’s technology across the U.S. South. If the FRSO can “flip” certain high “minority” Southern states from Republican to Democrat, it will permanently alter the U.S. political map in the left’s favor. The Democratic Party may be able to enjoy a permanent electoral majority for decades to come.

Again revealing a strategic targeting of black Americans, Bob Wing and McClure wrote in the article “The Importance of the Fight for the South–and Why It Can and Must be Won,” published by the FRSO-affiliated website Organizing Upgrade on Sept. 4, 2017:

“The majority of African Americans, the main protagonist of progressive politics in this country, live in the South. And the South has more electoral votes, battleground state votes, population, and congresspersons than any other region. The South is changing rapidly, giving rise to more progressive demographic groups–especially Black and Latino migrations, LGBTQs and urbanites–and a growing Democratic vote. These trends can only be maximized if the importance of the South is understood as a strategic necessity and the chance to win state by state, is acknowledged and acted upon. Hard as the fight is and will be, downplaying the Southern struggle is a losing political strategy and forfeits the moral high ground on the biggest issues facing the country.”

Bob Wing, incidentally, is a former leader of the Maoist “Line of March” organization and is now closely associated with FRSO.

McClure and Wing went on to gush that there “are tremendous opportunities to build progressive political power and governance at the local level in the South as 105 counties have a Black majority.”

Having effectively flipped Virginia, FRSO through its front organizations New Florida Majority and Florida Immigrant Coalition (FLIC) are working hard to elect their friend Andrew Gillum to the governorship of Florida. NVM has also been supporting Stacey Abrams in her bid for the governorship of Georgia.

Both Gillum and Abrams are black—cynically and strategically selected for their presumed ability to inspire the black vote. Both have benefited from massive voter registration efforts among “low propensity” black voters, and both are currently leading in opinion polls.

The NVM and FRSO are apparently using data generated in China to win elections for Democrats. Is this legal?

The Federal Election Campaign Act and Commission regulations include a broad prohibition on foreign national activity in connection with elections in the United States.

Foreign nationals or “principals” are prohibited from “making any contribution or donation of money or other thing of value, or making any expenditure, independent expenditure, or disbursement in connection with any federal, state or local election in the United States.”

A “foreign principal,” as defined at 22 U.S.C. 611(b), includes a foreign organization or “other combination of persons organized under the laws of or having its principal place of business in a foreign country.’”

Is sophisticated voter identification data a “thing of value”? Does Wuhan University qualify as a “combination of persons organized under the laws of or having its principal place of business in a foreign country”?

Trump is probably right to accuse China of seeking to interfere in U.S. elections. That interference may be much deeper than previously suspected. The Justice Department needs to immediately investigate those who may be involved in such potentially criminal efforts.