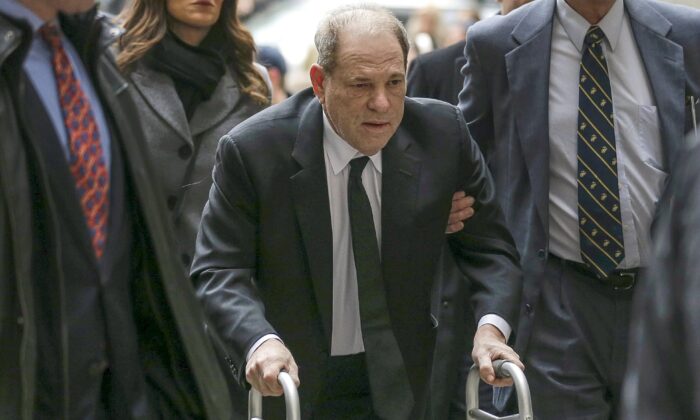 LOS ANGELES—Harvey Weinstein has been indicted on new sex crime charges in Los Angeles, just as his trial on separate rape and sexual assault charges in New York was poised to get underway, prosecutors announced Monday.

The Hollywood mogul has been charged with raping one woman and sexually assaulting another in separate incidents over a two-day period in 2013, Los Angeles County District Attorney Jackie Lacey said in a news release.

“We believe the evidence will show that the defendant used his power and influence to gain access to his victims and then commit violent crimes against them,” Lacey said in a statement. “I want to commend the victims who have come forward and bravely recounted what happened to them. It is my hope that all victims of sexual violence find strength and healing as they move forward.”

Weinstein allegedly raped a woman in a hotel room on Feb. 18, 2013, after he pushed his way inside her room, prosecutors said. The next night, he allegedly sexually assaulted a woman in a Beverly Hills hotel suite. That woman is expected to testify at Weinstein’s trial in New York. The charges took more than two years to file because the women were reluctant to provide all the information necessary, according to Lacey.

The Los Angeles district attorney’s task force is still investigating sex crime allegations against Weinstein from three women, Lacey said. Prosecutors declined charges involving three other women because their cases were beyond the statute of limitations.

Weinstein faces up to 28 years in state prison if he is convicted of multiple charges filed against him in Los Angeles. His arraignment has not yet been scheduled and prosecutors will recommend $5 million bail. Weinstein is expected to appear in court in California after his trial in New York is finished, Lacey said.

Lawyers for Weinstein had no immediate response to the new charges.

Lacey said there was no relationship between the timing of the New York trial and the filing of charges in Los Angeles. She said the filing and announcement came on the first business day all the necessary people could be gathered for the charges and announcement.

But that meant the dramatic announcement came the same day that Weinstein and several of the women who have accused him of sexual misconduct converged Monday at the New York City courthouse where a judge and his lawyers handled the final preparations for his high-stakes trial on charges of rape and assault.