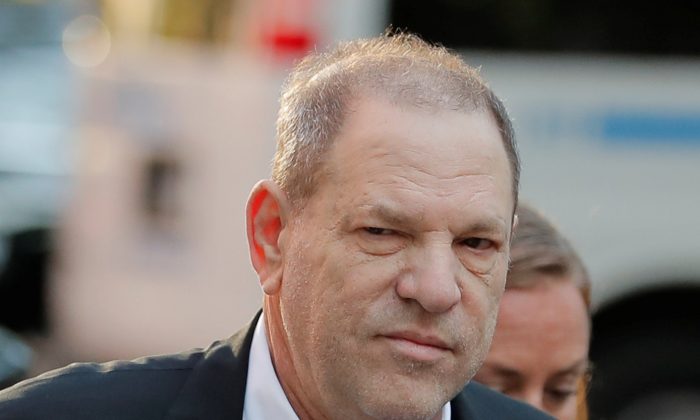 Film producer Harvey Weinstein arrives at the 1st Precinct in Manhattan in New York, May 25, 2018. (Lucas Jackson/Reuters)
US News

Harvey Weinstein, the former film producer accused of sexually assaulting scores of women, was indicted on additional charges Monday and, if convicted, he could possibly face life behind bars.

The former movie mogul is already facing three sex crime charges, including allegations involving two women, carrying a maximum penalty of 25 years in prison. The office of Manhattan District Attorney Cy Vance Jr., announced the additional charges, saying that they involve a third woman, coming from an incident in 2006.

In the latest round of indictments, he faces one count of criminal sexual act in the first degree, and two counts of predatory sexual assault. These are Class A-II felonies, the DA’s office noted, and they can carry a potential sentence of 10 years to life imprisonment.

“A Manhattan Grand Jury has now indicted Harvey Weinstein on some of the most serious sexual offenses that exist under New York’s Penal Law,” Vance said in a statement. “This indictment is the result of the extraordinary courage exhibited by the survivors who have come forward. Our investigation continues. If you are a survivor of the predatory abuse with which Mr. Weinstein is charged, there is still time to pursue justice. Please call us at 212-335-9373.”

Weinstein, 66, is free on $1 million bail following his May 25 arrest. He’s pleaded not guilty.

The other charges against him include rape in the first and three degrees as well as a criminal sexual act in the first degree. They arise from incidents in 2013 and 2004, respectively, according to the DA’s office.

Prosecutors have yet to name any alleged victims in the New York cases.

Representatives for Weinstein have yet to make a public comment on the matter.

Weinstein surrendered to police in May, and he was taken via a police escort amid a sea of reporters and photographers in New York City.

The Los Angeles Times noted that more than 80 women have come forward to accuse him of a range of sexual misconduct, from harassment to assault. These accusations have sparked the #MeToo movement that has ensnared a number of prominent actors, musicians, politicians, and others. Accusations have targeted former Sen. Al Franken, former “Today” host Matt Lauer, actor Kevin Spacey, music mogul Russell Simmons, and others.