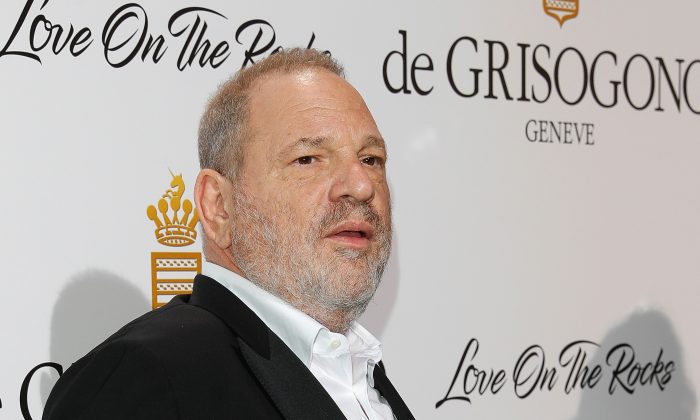 Harvey Weinstein attends the DeGrisogono 'Love On The Rocks' during the 70th annual Cannes Film Festival in Cap d'Antibes, France, on May 23, 2017. (Andreas Rentz/Getty Images)
Crime and Incidents

Harvey Weinstein, His Brother, and Their Company Hit With Civil Rights Lawsuit in NY

Harvey Weinstein, the movie producer who has been accused by numerous women of sexual assault and harassment, is now facing a civil rights lawsuit.

Weinstein has been accused by dozens of women of inappropriate behavior and at least five cases could potentially lead to formal charges.

Now a formal lawsuit has been filed by the attorney general in New York against Weinstein, his brother, and their company.

“The Weinstein Company repeatedly broke New York law by failing to protect its employees from pervasive sexual harassment, intimidation, and discrimination,” Eric Schneiderman, the attorney general, said in a statement.

“Any sale of The Weinstein Company must ensure that victims will be compensated, employees will be protected going forward, and that neither perpetrators nor enablers will be unjustly enriched. Every New Yorker has a right to a workplace free of sexual harassment, intimidation, and fear.”

The suit comes as the brothers attempt to sell their company, which was founded in 2005.

According to the Los Angeles Times, a deal was expected to be finalized on Sunday but appears to have been postponed.

#BREAKING: My office just filed a civil rights lawsuit against the Weinstein Company.

Any sale of the company must ensure victims are adequately compensated, employees are protected, and that enablers of sexual misconduct will not be unjustly enriched.https://t.co/VGcDpc2pkT pic.twitter.com/GyHV9pUS72

The investigation leading to the new lawsuit started in October after allegations of Weinstein’s sexual misconduct started.

Weinstein has denied he ever engaged in non-consensual sex.

The new lawsuit claims that the company’s board of directors and executives failed to protect employees from Weinstein’s predatory behavior, despite widespread knowledge of his actions.

Groups of female employees helped Weinstein complete his so-called conquests, according to the suit. The women were described as Weinstein’s “wing women.”

A separate group, predominantly female, served as Weinstein’s assistants and, according to the press release announcing the suit, “were compelled to take various steps to further HW’s regular sexual activity, including by contacting ‘Friends of Harvey’ and other prospective sexual partners via text message or phone at his direction and maintaining space on his calendar for sexual activity.”

According to Schneiderman, “This employee, and other TWC employees, believed that they would face adverse employment consequences unless they acquiesced to such demands.”