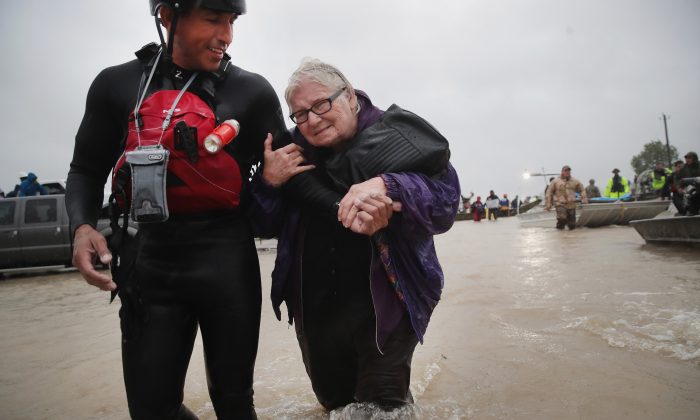 Barb Davis, 74. is helped to dry land after being rescued from her flooded neighborhood after it was inundated with rain water, remnants of Hurricane Harvey, on August 28, 2017 in Houston, Texas. (Scott Olson/Getty Images)
US

Before and after the floods
By NTD Television

Photos coming from the expansive area affected by former Hurricane Harvey reveal the devastation and suffering but also the strength of the human spirit in the disaster’s wake.


Hurricane Harvey and the ensuing floods left an area 15 times the size of Manhattan underwater, reported the Houston Chronicle.

Almost one third of Harris County, which includes Houston, is flooded after a record-breaking 51.88 inches of rainfall—the most from any storm on the continental United States.

According to the Department of Homeland Security, more than 1.7 million Texans are estimated to have been displaced by the disaster, reported Reuters.

Harvey is anticipated to dissipate by Saturday afternoon. Before then, areas in northern Mississippi, western Tennessee, northwest Georgia, and North Alabama remain at risk of heavy rainfall and flash flooding.

As Harvey dies down, millions have been left in its wake looking for shelter, food, and water. It may take days for the floodwaters to recede, and months before local residents are able to get back to some more normalcy in daily life.

For those wanting to help families affected by Harvey, donate through a trusted organization.