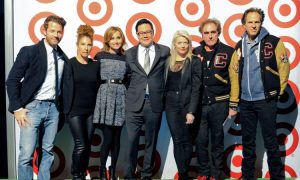 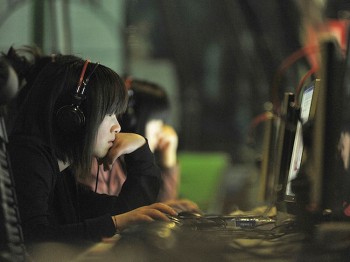 People at an internet cafe in Beijing. China on May 12. (Gou Yige/Getty Images)
China

An extensive study of the Chinese Communist Party’s (CCP) massive Internet blockade by several top universities including Harvard Law School has revealed that Epoch Times Nine Commentaries on the Communist Party is one of the top two most restricted topics singled out for Internet suppression. The study showed that 90 percent of tested Chinese-language sites on the Nine Commentaries were blocked.

With blocked websites in China numbering in the hundreds of thousands, the fact that the CCP has made the Nine Commentaries one of its top two priorities for Internet suppression indicates the effect the Commentaries have been having within China. Since being made available to people in China several months ago the Commentaries have lead to 1.3 million people resigning from the CCP. The number continues to increase at a pace of about 20,000 per day.

John G. Palfrey Jr. presented the study to the U.S.-China Economic and Security Review Commission hearing on China’s State Control Mechanisms and Methods. Palfrey is Executive Director of the Berkman Center for Internet & Society at Harvard Law School. His team included a team of researchers from the University of Toronto and the University of Cambridge who have been conducting rigorous empirical testing of China’s Internet filtering regime for the past several years.

Regarding its methods of testing, the study states, “To determine precisely what is blocked, we created a keyword list of terms on sensitive topics, such as the Falun Gong spiritual movement, the Taiwanese independence movement, and criticism of China’s government and leaders. We used the Google search engine to compile a list of large numbers of sites related to these keywords. Our volunteers then attempted to access these sites from within China using our testing application.”

Some of the other results listed from the study included:

– Blocking of 82% of sites tested with a derogatory version of Jiang Zemin’s name
– Blocking of 44–73% of sites tested, in both English and Chinese languages on the Falun Gong spiritual movement
– Blocking of 90% of sites related to the search term “Tiananmen massacre” and at least 48% of Chinese-language sites regarding the Tiananmen Square protest of June 4, 1989
– Blocking of virtually all content on the BBC’s web properties and much of the content published online by CNN

One interesting and illuminating result of the study is related to the CCP’s justification for its implementation of the blockade, which has been dubbed “The Great Firewall of China.” The CCP has claimed from the beginning that the Internet blockade has been put in place for the well being of the Chinese people in order to shield them from “subversive” and harmful information, such as pornographic websites.

However, the study, which is ongoing and continuously updated, found that “…less than 10% of sites related to searches for the keywords ‘sex,’ ‘pornography,’ and ‘nude’ were blocked,” suggesting that, “…blocking pornography is nowhere near the imperative that controlling political speech is in China.”

Even “blogs” (personal and group Internet web logs) have not escaped censorship. When blogs became popular in 2004, the CCP shut down China’s major blog service providers, allowing them to re-open only after their service included specific code that is able to detect and either block or edit sensitive keywords. A similar system exists for e-mails, which are either dropped or blocked if they include sensitive terms.

A broad range of laws and regulations have been created to help implement the blockade, but nothing specifically describes the manner in which the CCP will carry out their filtering regime, leaving much open to the CCP’s discretion based on the regime’s need for suppression.

In order to facilitate the enormous undertaking of strictly controlling the world’s second largest population of Internet users (after the U.S.) the CCP’s legal system has forcefully enlisted the cooperation of the society at large by imposing legal liability on all parties involved in the process of disseminating prohibited information. Legal liability falls on the author who creates it, the service provider who hosts it, and the end user who accesses it. This broad-ranging threat of legal responsibility proves effective, as it forces people to be on the defensive in case they unknowingly or mistakenly become involved in the transmission of banned information.

This ongoing study has been collecting data on the CCP’s Internet blockade since 2002. It says, “By any means of comparison, the People’s Republic of China’s Internet filtering regime has the greatest effect on the freedom of expression of any filtering regime throughout the world,” and that these extreme measures are due to “China’s deep-seated fear of the effect of free and open communications made possible by the Internet.”