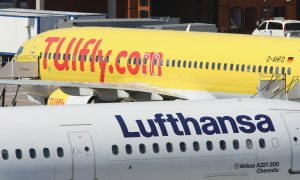 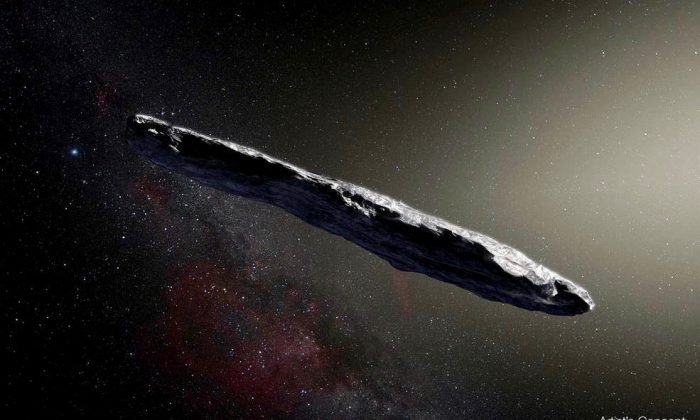 This artist’s impression shows the first interstellar asteroid: `Oumuamua. This unique object was discovered on Oct. 19, 2017, by the Pan-STARRS 1 telescope in Hawai`i. Subsequent observations from ESO’s Very Large Telescope in Chile and other observatories around the world show that it was travelling through space for millions of years before its chance encounter with our star system. (European Southern Observatory/M. Kornmesser)
Space

Harvard University Astronomy Department chair Avi Loeb has defended his hypothesis that a strange object—the Oumuamua—found in the solar system might be an alien probe.

“As soon as we leave the solar system, I believe we will see a great deal of traffic out there,” Loeb told Israeli newspaper Haaretz.

“Possibly we’ll get a message that says, ‘Welcome to the interstellar club.’ Or we’ll discover multiple dead civilizations—that is, we’ll find their remains.”

Loeb, 56, and fellow researcher Shmuel Bialy published a paper a few weeks ago speculation that the object isn’t a comet or asteroid.

Due to its strange trajectory, it might be an artificial light sail.

According to the report, the Search for Extraterrestrial Intelligence checked to see if the object emitted any radio messages or frequencies. However, none were found.

Loeb said he isn’t discouraged by the finding.

“I don’t care what people say,” he told the newspaper.

“I say what I think, and if the broad public takes an interest in what I say, that’s a welcome result as far as I’m concerned, but an indirect result. Science isn’t like politics: It is not based on popularity polls.”

He elaborated further on his hypothesis, which will likely draw more controversy in the astronomy community.

“We have no way of knowing whether it’s active technology, or a spaceship that is no longer operative and is continuing to float in space,” the newspaper quoted him as saying. “But if Oumuamua was created together with a whole population of similar objects that were launched randomly, the fact that we discovered it means that its creators launched a quadrillion probes like it to every star in the Milky Way.”

Loeb said he thinks the universe is littered with alien debris.

The Head of Astronomy at Harvard asserting that Oumuamua was a non-human solar sail. Great read that reflects on both (1) the lack of academic freedom with which most scientists work (2) further evidence that we haven't passed the Great Filter yet https://t.co/z3NdIJHVtA

“Our approach should be an archaeological one,” he added. “In the same way we dig in the ground to find cultures that no longer exist, we must dig in space in order to discover civilizations that existed outside the planet Earth.”

In November, the physicist and astronomer who discovered the Oumuamua, the first interstellar object ever discovered in the solar system, said a theory that the object is “a lightsail of artificial origin” is wild speculation.

A study from the Harvard Smithsonian Center for Astrophysics released this month suggested the 1,300-foot-long object might be a “lightsail.”

“There’s a maximum speed that you can be traveling to be bound gravitationally by the sun,” astronomer Robert Weryk told the CBC.

“When we first saw this object, it was traveling faster than that, so we know for a fact that it’s from outside our solar system. We decided that it was a comet that had a bit of outgassing that wasn’t visible from the ground, which is why it didn’t appear to be a comet.”