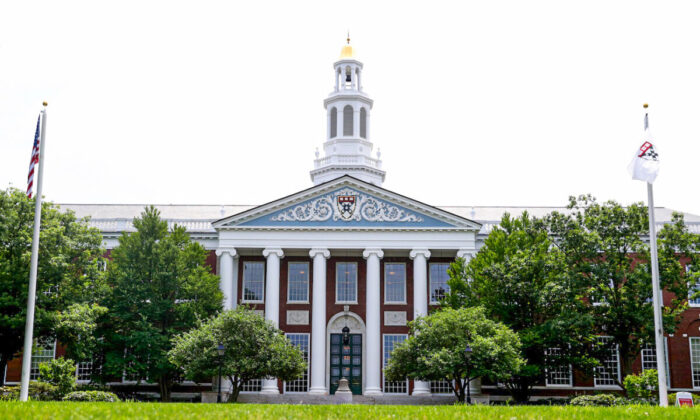 A view of the campus of Harvard Business School in Boston, Mass., on July 8, 2020. (Maddie Meyer/Getty Images)
US-China Relations

A student-run body at Harvard University recently hosted a Chinese diplomat who has previously denied claims of genocide in Xinjiang and described the Chinese Communist Party (CCP) as a “great Party.”

Huang Ping, consul general of the Chinese consulate in New York, told attendees of the annual Harvard College China Forum on April 16 that China is “embarking on a new journey to build a great modern socialist country.”

“Over the past 100 years, the [CCP] has united and led the Chinese people to achieve world-renowned achievements in developing our country and improving people’s lives,” he said during the opening ceremony.

As Huang spoke, millions in Shanghai and other parts of China were under lockdown, with many denied basic needs and suffering food shortages.

Huang previously called allegations of genocide committed against the Uyghur ethnic minority in Xinjiang “lies” that are “fabricated by some people with their own political agenda.”

“So, as I said, there’s no genocide, not a single evidence to prove that there’s a genocide or something there. It’s just slandering,” he said in an interview with SupChina in 2021.

Huang’s denial is in line with the CCP’s propaganda in relation to Xinjiang, a far west region where Beijing has detained over 1 million Uyghurs and other ethnic Muslim minorities, where they are subjected to torture, forced labor, and political indoctrination. Those not in detention have faced forced sterilization and are under near-constant monitoring under the regime’s expansive surveillance apparatus.

The U.S. government, several Western parliaments, and an independent tribunal have recognized the CCP’s actions in Xinjiang as a genocide and crimes against humanity.

Huang, in the same interview, said, “The Communist Party, I think it’s a great Party.”

Chinese Ambassador to the U.S. Qin Gang was another speaker at Harvard’s China Forum.

“The Chinese Communist Party is exploiting our education and research institutions to steal our secrets and gain influence,” Rubio told The Epoch Times in an email. “This is all part of Beijing’s plan to overtake the United States as the world’s most powerful nation.”

A Department of Education (DOE) database tallies Harvard’s contracts with China-based entities at $6.1 million from January to July 2021, and $26.8 million in 2020.

The database also showed gifts from China-based entities to Harvard valued at $6.8 million between January and July 2021, and $30 million in 2020.

These donations were revealed in part by a 2020 investigation by the DOE under the Trump administration, which prompted U.S. colleges to report $6.5 billion in gifts and contracts from foreign countries.

“Our investigations have identified facts suggesting institutions vigorously pursue foreign money, on the one hand, but provide generally ineffective or nonexistent oversight of foreign source activities, whether on U.S. campuses or on branded foreign campuses, on the other,” the DOE report said.

“This raises disturbing national security questions, among other issues.”