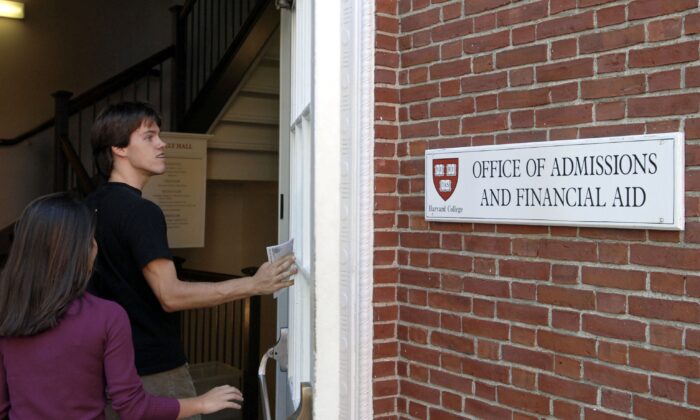 Students enter the Admissions Building on the campus of Harvard University in Cambridge, Mass., on Sept. 12, 2006. (Glen Cooper/Getty Images)
Education

Graduate student workers at Harvard University launched an indefinite strike on Tuesday after spending more than a year trying to negotiate their first union contract with school administrators.

The strike began on the last day of classes for the fall semester when members of the Harvard Graduate Students Union (HGSU) formed a picket line on campus, demanding fair pay, comprehensive health care, and protection from harassment and discrimination.

Graduate student workers will continue their personal academic work during the strike, but will not administer exams or grade papers, reported The Harvard Crimson, the school’s student newspaper. Several departments said they may delay grading or change final exam formats as a result of the strike.

Harvard and HGSU, which covers the work of over 4,000 graduate research assistants and student teaching staff, began negotiating their contract in October 2018, but the two sides have long been stuck on a number of terms.

At the center of the strike is a minimum wage. Harvard has offered raising minimum hourly pay to $15 for nonsalaried student workers and $17 per hour for hourly instructional workers. Student union negotiators, pointing to Harvard’s relative wealth as an institution and Boston’s high cost of living, demand $25 per hour for all workers.

Another HGSU’s core demand is to let graduate students submit grievances regarding cases of alleged harassment or discrimination. In response, university administrators said that such a system would create an inequitable process inconsistent with federal Title IX regulations, and force complainants and respondents into cross-examination.

University spokesperson Jonathan L. Swain said in an emailed statement that the University believes the strike is “unwarranted,” and negotiations with the union “will neither clarify our respective positions nor will it resolve areas of disagreement.”

“The University appreciates the vital role that our student workers play in fulfilling Harvard’s teaching and research mission,” the statement read. “We very much hope that through ongoing good-faith efforts…we can reach a reasonable resolution that enables our students to be successful and thrive.”

The HGSU has been picking up support outside the campus. All 11 members of Massachusetts’ Congressional delegation, including Democratic presidential candidate Senator Elizabeth Warren (D-Mass.), sent a letter to University President Lawrence S. Bacow, urging the University to “ensure fair treatment and strong workplace protections” for student workers.

Another Democratic presidential frontrunner, Sen. Bernie Sanders (D-Vt.) voiced his support for HGSU members in a statement on Monday. “I stand in solidarity with the student workers at Harvard. All workers deserve respect, dignity, a living wage, access to adequate health care, and protection against harassment and discrimination,” Sanders wrote. “I urge the administration to bargain in good faith for a fair contract.”