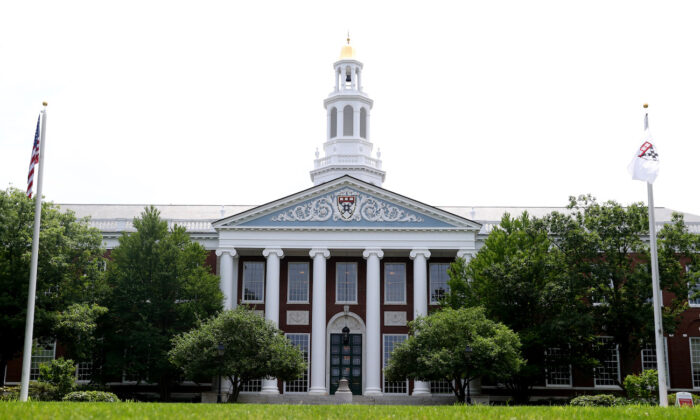 The campus of Harvard Business School in Boston, Massachusetts, on July 8, 2020. (Maddie Meyer/Getty Images)
US News

The graduate business school of Harvard University is temporarily moving some of its classes online after having begun the semester with in-person classes amid a surge in COVID-19 cases.

Classes for all first-year and some second-year MBA students at Harvard Business School (HBS) are being moved online for a week, from Sept. 27 through Oct. 3, after a spike in COVID-19 cases on the campus, reported The Harvard Crimson, the university’s student newspaper.

According to COVID-19 testing data from Harvard University, about 95 percent of students and 96 percent of staff are fully vaccinated. Over the past seven days, 60 of the 74 positive cases reported were graduate students.

Four administrators of HBS said in an email to all MBA students on Sept. 23 that the school, located in Boston, Massachusetts, has identified 121 cases among MBA students since July 1 and that first year students comprise 75 percent of those cases, the newspaper reported.

“We are a complete outlier among Harvard schools in our numbers. MBA students comprise roughly 9% of the student population at the University, but have accounted for more than two-thirds of total student cases in September. Our positivity rate is 12 times that of the rest of Harvard,” reads the email from the school’s dean, executive dean, executive director of the MBA, and senior associate dean.

They added: “There is something about the way we at HBS interact that makes our MBA community susceptible to the Delta variant … This seems unique to HBS; we have a far higher rate of infection than other Harvard schools.”

HBS spokesperson Mark Cautela said in a statement to news outlets on Monday: “Contact tracers who have worked with positive cases highlight that transmission is not occurring in classrooms or other academic settings on campus. Nor is it occurring among individuals who are masked.”

According to The Harvard Crimson, the four administrators in their email attributed the rising cases to “numerous unmasked, indoor activities—everything from sharing an Airbnb for the weekend, to dinner gatherings in an apartment, to larger parties,” and urged students to stop all unmasked indoor social activities. They also said that students of the school are expected to test three times a week, for now.