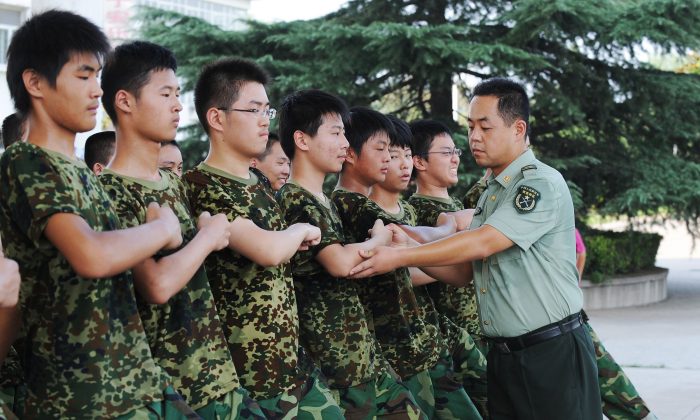 Chinese students practice marching under the supervision of a People's Liberation Army soldier during their one week of first-year high school military service at a military base in Hefei, east China's Anhui province on Aug. 5, 2010. Recent scandals involving the military training of students have provoked public anger at the programs. (STR/AFP/Getty Images)
China

Across China at the beginning of every school year, students are begrudgingly transferred to military training camps for days or weeks, where they are subject to a harsh regime of paramilitary training exercises, meant to test their endurance and demonstrate their obedience to authority. Students comply with the programs—they have no choice in the matter, after all—but in a number of recent incidents, the harsh approach of the military trainers has sparked violent conflict with the teenagers they were sent to instruct, and caused several deaths.

“Boys had to have their heads shaved, hair no longer than 3mm, and were punished by being made to sit in puddles,” a college freshmen who underwent military training told state news media recently.

Photos of freshmen from the Northwest University of Politics and Law in Xi’an City of Shaanxi Province show students in military uniforms marching in heavy rain, holding umbrellas, on Sept. 14, according to China Business News.

When the rain diminished they were told to put the umbrellas down and keep exercises in the lighter rain, the report said.

If a student’s posture was off, he was told to sit in a puddle and then stand up—and repeat, dozens of times. The female students were then asked to come and watch the punishment of the males, a move meant to heighten the humiliation, one of the male students said.

Military trainings are held across China in middle schools, high schools, and colleges, normally at the beginning of the first semester of the first year. The ordeal can last from days to over a month, depending on the location in China. The students are typically shipped onto a military base where soldiers and reservists get to work.

A military trainer acknowledged that the experience can be rough, in an interview with Chinese media, but said the purpose of the harsh training is to toughen the students up, so they’ll be able to bear more later on.

A number of scandals have given many Chinese a dim view of such pronouncements, however. The physical punishment meted out by military trainers has sometimes seriously hurt students, and in several cases caused death.

On Sept. 10, for example, a 13 year-old male in Baoding City of Hebei Province was sent home in the middle of a military training because the teacher said he was too tired. When He got home he began throwing up, and then passed out. He died in hospital the next day—the doctor said from a severe head injury. The parents suspect that he was badly beaten at the military training camp.

A similar incident took place on Aug. 9, in Qingdao of Shandong Province, when a 15 year-old boy died from heatstroke during military training. Other cases of death have been reported this year.

One female high school student in Jingdezhen City of Jiangxi Province committed suicide during military training on Sept. 6, jumping into a river near the school after being scolded by her teacher for not wearing her military uniform.

Male students have been punished by being made to do push ups as female students lie on the ground underneath them, during military training at Nanjing Normal University. The news, with photographs, was spread widely, and readers reacted angrily, saying that the punishment was entirely improper.

A large scale clash broke out between students and their military trainers on Aug. 25, in Longshan County of Hunan Province. One of the trainers began kicking and beating a student with sticks, for what he said was a lack of respect to another trainer. This triggered a mass brawl between the groups. One teacher was beaten to unconsciousness and needed to be hospitalized, while many students suffered bone fractures. Local officials said that the ten trainers involved were being fined and detained—though the announcement did not say that they would be fired.

These military training scandals have raised discussion in China on the purpose of military training for non-enrolled civilians. “The only point of military training is in fact to train students to be obedient. It doesn’t do anything else besides that…” said the Well-known Internet commentator Wuyuesanren, to his more than one million followers on Sina Weibo. “Learning about camping, knowledge about plants and animals, or participating in charity activities are much more useful than military training, which is mostly about marching.”