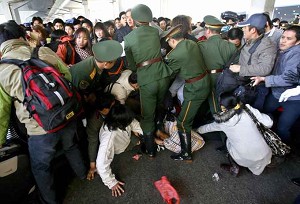 Stranded passengers at the Guangzhou Railway Station were out of control due to the severe winter storm just prior to the Chinese New Year. (Liu Jin/AFP/Getty Images)
China

Just prior to the Chinese New Year, a severe, record-breaking snow storm hit southern China. Much of the region lost power in the storm causing severe setbacks at railway stations.

At one point, 800,000 stranded passengers crowded Guangzhou Railway Station anxious to return home. The stampeding crowd resulted in many injuries and was even responsible for a fatality. On February 17, the Vice-chairman of Guangzhou's Political Consultative Conference, Guo Xiling, fiercely criticized the departments responsible for this accident, insisting that many at the Department of Rail Transportation should be ousted from their posts. This was the most serious criticism brought about by the snow crisis according to mainland Chinese media. “Two departments should be criticized, the weather forecast department—which failed to forecast the severity of the disaster—and the Department of Rail Transportation which did an even worse job,” Guo Xiling said to the New and Fast newspaper.

Guo pointed out that at the time, Hengyang and Zhuzhou were completely without power, and no one knew when it would be restored. “At this time one could already predict that trains would be unable to move for the next few days, yet the Department of Rail Transportation was still selling tickets,” said Guo.

“Because of the power outage, the Department of Rail Transportation had to find diesel trains to replace the electric ones. The diesels were finally found in Xinjiang, but everyone who knew how to operate them were unemployed, so it took some time to invite them back to work. After securing the engineers, the No. 5 diesels couldn't be found because a different type of diesel is in use nowadays,” explained Guo.

Local officials had urged passengers to return their tickets and stay in Guangzhou for the New Year. However, the Department of Rail Transportation promised to finish transporting all the stranded passengers in Guangdong district, causing some of the farm workers to change their minds about staying in the area. In a very short period of time, several hundred thousand passengers crowded the Guangzhou railway station with the promise of returning home. As the crowd lost control, some died in a tragic stampede.

Chinese Chairman Hu Jintao reportedly ordered 1500 soldiers armed with tanks to enter Guangzhou Rail Station, in an effort to bring security and order back to the station.

According to Hong Kong's Mingpao Daily, Guo Xiling's harsh criticism toward the Department of Rail Transportation only reflects the tip of the iceberg relating to conflicts between the local governments and central departments.

The report points out that following the snow crisis, a vital power line in southern China was covered by snow, which caused a power outage in a large area. When the city of Guangzhou urged the Department of Rail Transportation to offer diesel locomotives to respond to the crisis, they argued that the city of Guangzhou should be responsible for the cost. But since Guangzhou didn't consider itself a disaster area, it refused to pay any cost. The two sides fought back and forth, causing the already tense situation to escalate. In the end, Chinese Prime Minister Wen Jiabao traveled to Guangzhou to coordinate the effort. Only then the problem was resolved.

This snowstorm caused enormous economic loss. The official announcement from the Chinese communist regime last week reported that since January 10 the snowstorm had spread to 21 provinces, districts, and cities throughout southern China, among which, Hu Nan, Gui Zhou, An Hui, Hu Bei, Guang Xi and Si Chuan were said to have suffered the most damage. This snowstorm is responsible for 107 deaths, 8 missing, and the direct economic loss amounts to 111 billion Yuan (US $15 billion).