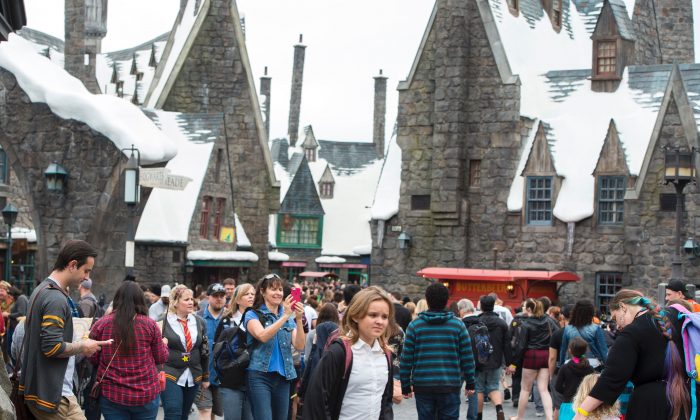 Fans discover Hogsmeade at the Grand Opening of the 'Wizarding World of Harry Potter' to the public at Universal Studios Hollywood, in Universal City, Calif. on Apr. 7, 2016. (VALERIE MACON/AFP/Getty Images)
Entertainment

If you search for Platform 9 ¾ on Google Maps, it takes you to King’s Cross train station in London, which today is busy with muggles taking pictures on the 20-year anniversary of the Harry Potter series.

The first book was published in 1997 in the U.K. and a year later in the United States.

Initially only 500 copies were printed. Twenty years later, the series of seven novels has sold 450 million copies across the world in 79 languages and the movies made from the books are almost as popular.

Fans of the series took time off work to celebrate, some in person at King’s Cross, where they took pictures with Harry Potter scarves and posed next to a luggage cart that appears to disappear into a brick wall.

Harry Potter shop photographer, Clara Carson, was on hand to help people get the most Harry Potter-esque pictures possible. She provided Harry Potter scarves that she would toss into the air to make it look like they were rushing to get on the Hogwarts Express. She herself is a fan, and she said she likes being around others who love the series as much as she does.

“Whether they’re kids or my age or even adults they’re always just so excited,” she said. “Harry Potter I think still means so much to so many people even though it’s [been] 20 years now.”

Mimicking the Marauder’s Map, Google maps tweeted a photo of the King’s Cross train station with avatars for the locations of protagonist Harry Potter and his friends Ron Weasley and Hermione Granger. The caption read, “We solemnly swear we are up to no good,” a reference to the password-protected magical map that the characters used to see where people were.

Harry Potter author J.K. Rowling noted the anniversary on Twitter, saying, “20 years ago today a world that I had lived in alone was suddenly open to others. It’s been wonderful. Thank you.”

The hashtag #HarryPotter20 was trending on Twitter throughout the day.