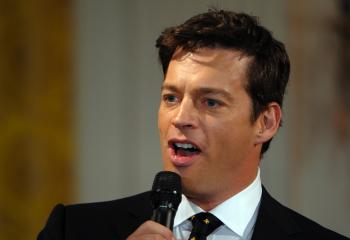 By Ian Ritz
Print
The top five contestants from the ninth season of American Idol got a treat Tuesday when professional singer Harry Connick Jr. took some time to school the crew on the singing styles of legendary performer Frank Sinatra.

American Idol judges were looking closely to see who is on the top of their game as Frank Sinatra week came to a close, featuring performances by contestants on the show. It seemed the throw back style and big band arrangements may have set the bar a little high for contestants, who were used to the water-downed pop standards of popular music. Some of the renditions were less than accurate but Harry Connick Jr. had words of encouragement for those on the show.

"I had a chance to really spend some time with them and as you all know these contestants are just great,great people and they’re great singers and they’re learning a lot. The great thing about it for me is how humble they were through the process," said Connick on American Idol.

Sinatra Week on American idol was advertised on www.sinatra.com, naming the contestants who were to perform on American Idol. Frank Sinatra was not only a singer but also an actor who did some work as a producer. Rights to make a movie about the life of Sinatra have been given to Martin Scorsese with rumors circulating that Leonardo DiCaprio will be the star.

Tickets for Harry Connick Jr.’s series of 11 shows titled “In Concert On Broadway” went on sale Tuesday as well. To purchase tickets visit www.ticketmaster.com or www.harryconnickjr.com.