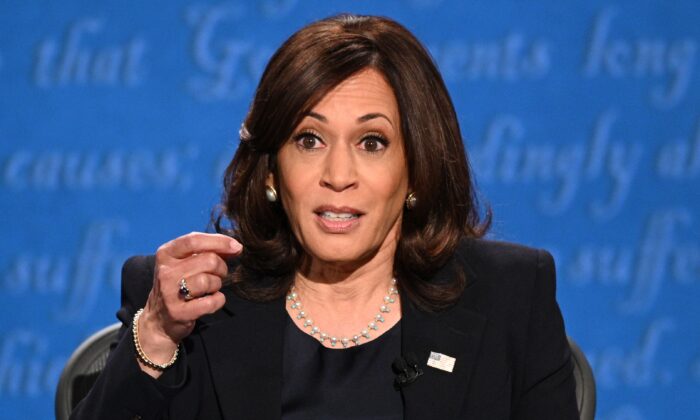 Sen. Kamala Harris (D-Calif.), who sits on the Judiciary Committee, said she will take part in this week’s confirmation hearings for Supreme Court nominee Judge Amy Coney Barrett, but she will work remotely from her office.

“Due to Judiciary Committee Republicans’ refusal to take commonsense steps to protect members, aides, Capitol complex workers, and members of the media, Senator Harris plans to participate in this week’s hearings remotely from her Senate office in the Hart building,” said Chris Harris, a spokesman for the Democratic vice-presidential nominee, to news outlets on Sunday.

Harris also wrote on Twitter that by “moving forward with Supreme Court confirmation hearings” starting on Monday, Senate Judiciary Chairman Lindsey Graham (R-S.C.) and Republicans “are endangering the lives of not just members and our staff, but the hardworking people who keep the Senate complex running.”

Sens. Thom Tillis (R-N.C.) and Mike Lee (R-Utah), who sit on the committee, both tested positive recently for the virus. Sens. Ben Sasse (R-Neb.) and Ted Cruz (R-Texas) are self-isolating but are expected to return for all or part of the hearings in the Senate.

“I actually do think that it would be smart to do that, and I hate to do it without having reasons to do so, but I think if we’re going to be working in close proximity over long hours, it’s probably not a bad idea,” Sen. Joni Ernst (R-Iowa), a member of the committee, told reporters this week, referring to committee members being tested for the CCP virus.

Harris’s comments represent yet another attack from Democrats on the upcoming confirmation process. Previously, top Democrats in Congress said Republicans should wait until the election is over before a nominee is selected.

Graham has defended his panel going ahead with the confirmation hearing.

“We’re going to run the hearing in a medically compliant way, but I’m not going to live my life differently than you have to live yours,” Graham said in an interview over the weekend. “We are setting the hearing room up based on CDC guidelines, I just got a statement today from the architect of the Capitol who consulted with the House physician, saying that the room is set up in a compliant way.”

Meanwhile, Barrett is expected to deliver an address to the committee on Monday.

“I have been nominated to fill Justice Ginsburg’s seat, but no one will ever take her place,” Barrett will tell the committee, according to a copy of her remarks. Barrett’s remarks will go over her legal philosophy and will stress that she is a proponent of the late Justice Antonin Scalia’s legal theories. Barrett previously was a legal clerk for Scalia, who died in 2016.

“It was the content of Justice Scalia’s reasoning that shaped me. His judicial philosophy was straightforward: A judge must apply the law as written, not as the judge wishes it were. Sometimes that approach meant reaching results that he did not like,” Barrett is expected to say.