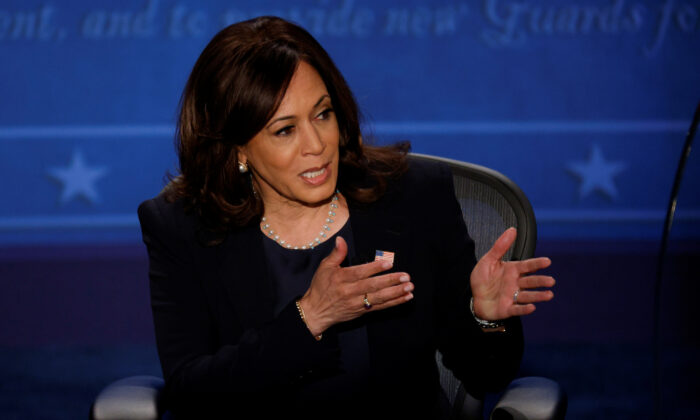 Harris Vows to Get Rid of Cash Bail

Democratic vice presidential nominee Kamala Harris is vowing to take steps on criminal justice reform that would include establishing a national registry for police officers that break the law, and also ending the cash-bail system.

“We will, on the issue of criminal justice reform, get rid of private prisons and cash bail, and we will decriminalize marijuana and we will expunge the records of those who have been convicted of marijuana,” Harris said Oct. 7 at the vice presidential debate in Salt Lake City with Vice President Mike Pence.

Harris is also on record in support of abolishing the death penalty, as well as eliminating mandatory minimum sentencing at the federal level and incentivizing states to do the same.

Proponents of ending cash bail argue the practice creates a two-tier system that disproportionately affects the poor; those who can afford to post bail after being arrested are released from detention until trial, while those who cannot must sit in jail until they appear in court.

“Our bail system is unjust and broken,” Harris wrote in a post on Medium, adding, “450,000 Americans sit in jail today awaiting trial because they cannot afford to pay bail,” and that, “excessive cash bail disproportionately harms people from low-income communities and communities of color.”

It has its detractors, however, who argue that eliminating cash bail means that more people charged with crimes will be out on the streets, making society less safe.

In January, New York state introduced a law prohibiting criminal courts from setting cash bail for most misdemeanors and some felonies.

“Just to say carte blanche everybody goes, I think … it’s doing a disservice to our constituents,” Apple said in a December 2019 interview with WNYT, saying that for lesser crimes, it makes sense.

“I have no problem with them not seeing a day in jail. Assaults? Criminally negligent homicide? Manslaughter? Come on,” the sheriff said.

A case that drew controversy in New York City in January was that of a woman accused of assaulting several Jewish victims being released multiple times due to the state’s soft-on-crime policies.

A nonprofit in Minnesota, which received donations of around $35 million in the wake of demonstrations and riots following the death of George Floyd, bailed out defendants from Twin Cities jails who were charged with violent felonies, including murder, according to Fox 9.

While much of the money donated to the Minnesota Freedom Fund (MFF) was used to help protesters get out of jail and for gross misdemeanor offenses, the report found that the fund also helped cover the bail needs of a suspect who shot at police, a twice-convicted sex offender, and a woman accused of killing a friend.

Harris drew criticism after she took to Twitter on June 1 to call for donations to the MFF.

The Salt Lake City event was the only vice presidential debate of the campaign.

President Donald Trump and Democratic nominee Joe Biden are scheduled for their second and third debates on Oct. 15 and 22.