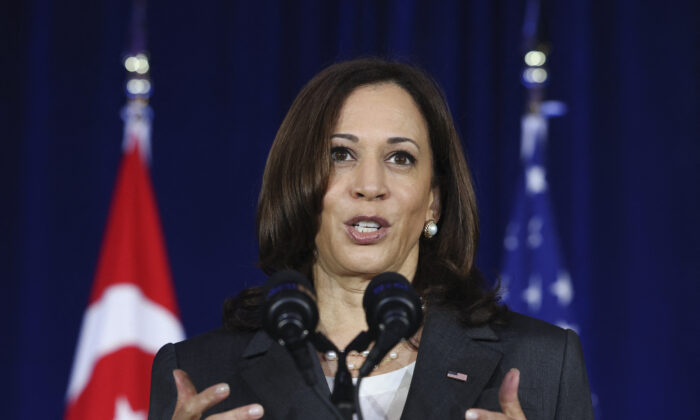 U.S. Vice President Kamala Harris delivers a speech at Gardens by the Bay in Singapore on Aug. 24, 2021. (Evelyn Hockstein/POOL/AFP via Getty Images)
Viewpoints

According to Harris’ recent address to the National Congress of American Indians on Columbus Day, those Americans descended from European settlers should be ashamed about their nation’s history.

She said the settlement of North America was based on land theft and was devastating to tribal nations. She went on to pledge that the Biden Administration would confront this “shame.”

It seems extraordinary that a world leader could air such a limited view of history. But, of course, this myopic perspective is shared by many left-wing activists who want to rewrite history to portray European empires as evil and villainous.

The radical Left favours simplistic villain-victim narratives because their whole strategy is predicated on persuading segments of society that they are victims, then stirring these “victims” into action and revolution against alleged villains.

Such activism deploys propaganda based on a selective reading of history. One that cherry-picks and emphasises the bad, while ignoring the good.

By adopting the Left’s cherry-picked version of the past, Harris’ will perceive white Americans as shameful villains and racist exploiters.

Presumably, the next step in this villain-victim narrative will be a refreshed version of the old socialist wealth-transfer model, which could see white Americans pay reparations to compensate for their forefathers.

Yet curiously, these descendants of colonialists, who should be ashamed of their past, appear to have built a society so appealing to outsiders that the United States’ borders are currently overwhelmed with large numbers of “victims” desperate to migrate and live in the same society as supposed villains.

So European settlers and their descendants must have got something right?

One does wonder what Harris’ vision for America really is.

Surely, she is not idealising the subsistence economies prevalent in tribal societies and mythologised by philosopher Jean-Jacques Rousseau.

More concerning, however, is the lack of perspective revealed in Harris’ attack on her country’s history. In particular, her use of the current fad of attacking European empires and settlers displays a profound lack of knowledge about both the role of empires and colonial settlement over thousands of years.

First, does Harris realise that not all empires were European? Does she know that many non-Europeans civilisation were engaged in colonialism and settling vast tracts of new territory? Would these people also be “villains?” Or is that label only suitable for Europeans?

To put the issue in perspective, let’s look at some non-European examples.

There was the Bantu expansion in Africa when tribes left their original homelands from what is now Cameroon to colonise central, east, and southern Africa. These Bantu colonists eliminated the original inhabitants of east and southern Africa called the Khoisan. So, to use Harris’ logic, does that constitute land theft and a “shameful” episode of history?

Then there was the period of Arab imperialism when Arab-Muslims left their Arabian homeland to conquer and colonise North Africa, including today’s Egypt, Sudan, Libya, Tunisia, Algeria, Morocco, and Mauritania.

Another imperial project was the Mughal empire build by Turco-Mongol peoples from Central Asia. The Mughal empire conquered the area that would today be called Afghanistan, Pakistan, India, and Bangladesh. Mughal imperialism was also a significant force in building what we would today call Indian culture.

Yet another stunningly successful Muslim empire was built by the Turks. The Ottoman-Turkish empire occupied vast swathes of Asia, Europe, and Africa and witnessed Turkish colonisation, which erased Greek settlements across Anatolia.

The cultural impact of Ottoman expansion can still be seen today across the Balkans, the Middle East, and North Africa. Yet, would Harris expect descendants of these imperialists to express shame about what their ancestors did?

What about Chinese or Han imperialism? The original area of Chinese settlement constituted a tiny part of what is today China. The story of Chinese civilisation has been one of empire building and colonisation, and today, we see no expressions of guilt or shame from the Chinese population about their ancient history. Instead, we see pride in the achievements of the empires.

Interestingly, we also see no shame or guilt from Russians about their empire-building phase and their colonisation of Siberia that created a country stretching from Europe to the Pacific and down into the Caucuses.

The point is history is complex. Empires do bad things and good things.

The simplistic and naïve villain-victim model that left-liberals apply to the world is based upon either an ignorance of history or a deliberately dishonest historiography that cherry-picks.

Calls for “shame” reveal an absence of perspective that one would expect from someone illiterate in history. Empires and colonialism have been part of human history for thousands of years, and all of us are the products of the coming and going of these empires.

Further, at the heart of empire-building are questions of sovereignty.

Groups (whether nations or tribes) unable to organise themselves well enough to protect their sovereignty get absorbed by empires. At the same time, groups who build and manage successful sovereignty maintain their independence.

History shows us that groups with weak political structures and economies are absorbed by the better organised. Empires grow at the expense of the poorly organised and thereby spread their development, organisational skills, and civilisation to new areas.

The idea that the successful should apologise for being successful is absurd.

Indeed, it is the absurdity upon which the ideology of socialism is built.

Should Kamala Harris learn some of the realities of human history, she might realise how absurd her naïve narrative of “shame” sounds.

In addition, she may also learn something about how real sovereignty works. And given the shocking handling of the U.S.-Mexico border so far by the Biden-Harris administration, they sure have a lot to learn about how nations should protect their sovereignty.