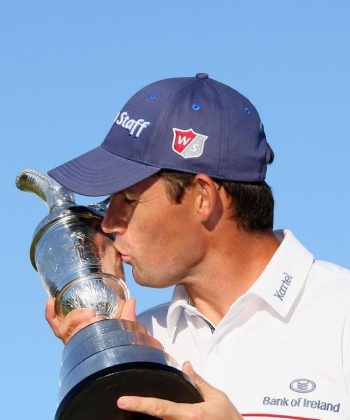 The last player to win back-to-back Opens and the Claret Jug was Tiger Woods in 2005 and 2006.

At the beginning of the day, Harrington was two shots behind the surprise leader, Australian Greg Norman, 53.  The two played together in the last foursome.  Based on Norman’s amazing play the first 3 days of the tournament and the two shot lead he took into the last round, it appeared his for the taking.  But the veteran’s age appeared to take a toll on him physically and he could not keep up with his younger competitors.

Norman shot 77 to end up sharing third at 9 over par with Swede Henrik Stenson.

But although Norman could not close the deal he added excitement and the unexpected for what might have been in the absence of world number one Tiger Woods.

Harrington graciously acknowledged two-time Open champion Norman by saying, "I'd like to thank Greg Norman. He was a tremendous gentleman to play golf with today; his sportsmanship was second to none. It looked like it might be his today, but his response to all my good shots was just tremendous.”

Harrington won The Open the year before under difficult conditions and with Tiger Woods in the field. This championship was a little less interesting without Tiger who is recuperating from knee surgery, but Harrington provided his own show-stopping theatrics at the last two holes, in Tigeresque fashion.

It was a nail-biter up to the 17th hole when Harrington hit a spectacular shot to within a few feet of the hole before draining it for an eagle and a 4-shot lead that he did not relinquish for the win.  To emphasize his control of the tournament he hit his second into the 18th green, close enough for a birdie try, that he narrowly missed for a par.

The highest finishing American was Jim Furyk at 10 over par, tied for 5th with English amateur Chris Wood, 20.  World number two Phil Mickelson finished at 14 over and tied for 19th place.

"It’s important that you go on and win a second major. Very few people have won two majors or back-to-back majors,” said Harrington.

With the win, Padraig Harrington acquires the title, “Champion Golfer of the Year,” for the second year in a row.   And as Arnold Palmer pointed out, “Any player that wants to be recognized as having made his mark in professional golf, he must have won the British Open,”―Harrington has certainly more than made his mark with back-to-back wins.