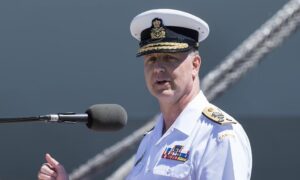 OTTAWA—The Conservative government tried to turn bad economic news to its political advantage as the Bank of Canada outlined a less-than-rosy financial forecast for the rest of the year that could threaten the government’s pledge to balance the budget.

The central bank projected the economy would grow by just 1.1 per cent this year—much lower than the 2.0 per cent that was expected when the Conservatives put together their last budget.

If the bank’s dismal forecast comes to pass, the $1.4 billion surplus projected in the 2015 budget could well become a deficit, since federal coffers would be $4.1 billion slimmer, according to a sensitivity analysis in the April budget.

The optics of running a deficit could be tricky for the Conservatives as they head into an election touting themselves as the only party that could manage federal finances in rough economic times. The government could well be forced to find about $2 billion in savings to balance the books, and raid the $1-billion set-aside for contingencies.

The opposition parties could also be forced to rethink their own campaign pledges if the fiscal cupboard is bare.

Prime Minister Stephen Harper’s office used the Bank of Canada’s announcement Wednesday to launch a political volley at the opposition parties, saying in a statement that voters shouldn’t take “unnecessary risks” by electing anyone but the Conservatives.

“And the message from the government is ‘well, let’s stick with the formula that is not working because anything else would be more dangerous.’ It really doesn’t make sense,” he said.

Liberal critic Scott Brison called the response from the Prime Minister’s Office “an abdication of leadership” from a government with “no real economic plan, only political tactics.”

Brison said the government needs to give Canadians an update on federal finances so voters and opposition parties can make an informed assessment of the fiscal situation. He argued the only reason the government wouldn’t provide such an update was if the Conservatives wanted to hide the fact the federal budget is still in a deficit.

The Conservatives have attacked the leadership credentials of NDP Leader Tom Mulcair and Liberal Leader Justin Trudeau over the past few weeks as upheaval in Europe, a slide in oil prices, declines in exports and market volatility in China have shaken the Canadian economy and hit the government’s bottom line.

Despite the dismal economic forecast, Finance Minister Joe Oliver said the government remains focused on balancing the budget this year and providing billions in universal child care benefits to millions of families.

The NDP’s Caron called the Conservative drive to balance the budget “dogmatic”, leading to poor decisions including using up a surplus in the employment insurance fund and reducing the contingency reserve by $2 billion.

“All those decisions have been made so that they could come and show that they had a surplus budget, which might not actually come to reality because of the changing circumstances,” he said.

Mike Moffatt, an economist from Western University’s Ivey Business School, said the government could hurt a fragile Canadian economy if it removed $2 billion in federal spending from the economy “to hit an arbitrary budget target.”

“Pretty much every economist across the board would say, just sort of let this happen, run a small deficit because…running a small deficit economically is not a problem,” said Moffatt, who has advised the Liberals on their economic plans.

The government is providing almost $3 billion worth of child care payments to parents across the country this month. The increased federal benefit payments, backdated to the start of the year, will land in mailboxes and accounts starting Monday.

The Bank of Canada considers the payments to be stimulus spending that should increase consumption by about one per cent under the assumption that most, but not all, of the benefit cheques are spent.

“It’s a significant thing to our outlook; and of course underneath all that too is a continuing infrastructure program. So there is a persistent effect,” bank governor Stephen Poloz told reporters.

Poloz, however, wouldn’t say whether Canada is in a recession despite a contraction during the first four months of the year and dire assessments from major banks.