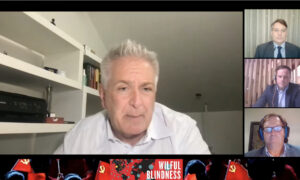 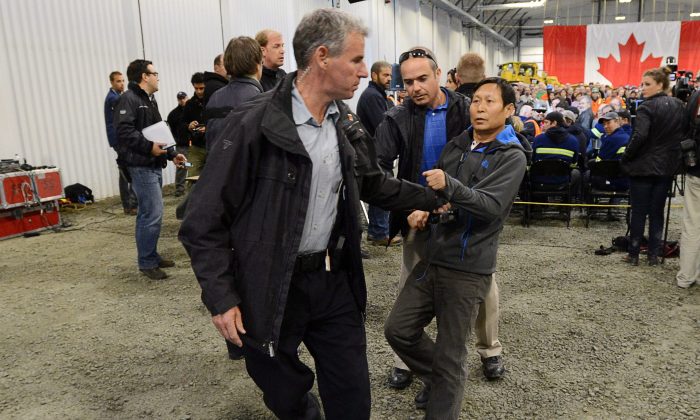 Li Xue Jiang of the People's Daily, a newspaper owned and controlled by the Chinese Communist Party, is hauled to the back of the room by RCMP after making an aggressive attempt to question Prime Minister Stephen Harper at Xstrata Nickel's Raglan Mine in northern Quebec on Aug. 23. (The Canadian Press/Sean Kilpatrick)
Canada

RAGLAN MINE, Que.—Prime Minister Stephen Harper’s tour of the North ended Friday with a dust-up involving a Chinese journalist who was prevented from asking a question about rules surrounding foreign takeovers.

Li Xue Jiang of the People’s Daily, which is owned and controlled by the Chinese Communist Party and China’s largest newspaper, had been following the week-long tour.

The Prime Minister’s Office limits the number of questions during public events and other journalists on the tour offered Li the opportunity to query Harper.

When staff refused to recognize him, Li tried to take the microphone, triggering a tussle involving one of the prime minister’s communication officers that ended with him being hauled to the back of the room by RCMP security staff.

He was not detained or charged.

“It’s not fair,” Li said afterward. “I would have liked the prime minister to clarify the federal government policy and regulations towards foreign state-owned companies investment because it is not clear since the Nexen takeover. People in China would want to know.”

Last winter CNOOC Ltd., China’s state oil company, was given the green light to take over and Nexen Inc. in a $15.1 billion deal for the Alberta oil patch giant.

There were 10 journalists following Harper on the tour, and his availability was tightly scripted, with only four or five questions allowed before reporters were cut off.

The incident took place at the end of an event at the Raglan Mine in northern Quebec, where Harper was lauding a renewable energy project funded by the federal government.

Li, the newspaper’s bureau chief and a former Washington correspondent, said the communications staff initially gave him the indication he would be called upon, but then revoked it just before the prime minister’s availability.

He said he doesn’t intend to ask his embassy to file a protest, and apologized for causing a fuss.

PMO spokesman Andrew MacDougall responded on Twitter saying that the matter will be raised with the Parliamentary Press Gallery and he called on Li to apologize immediately.

“Agree or disagree with how events are run, there was no excuse for the Chinese state reporter to get physical with our staff,” MacDougall wrote.

But Li was incredulous. “Why should I apologize? They should apologize to me for depriving me of my right to ask a question,” he said.

It’s not the first time Chinese media outlets have ended up in the news rather than merely covering it.

Last year freelance journalist Mark Bourrie said he stopped working for China’s official Xinhua News Agency because it asked him to spy on the Dalai Lama during a visit to Ottawa.

Bourrie said Xinhua’s Ottawa bureau chief wanted him to go to the Tibetan spiritual leader’s final news conference and turn over all notes and materials without writing a story. Xinhua denied the claim.

Eyebrows were also raised two years ago by a flirtatious correspondence between Conservative MP Bob Dechert and a Xinhua journalist.

The government downplayed the issue and said no secrets were revealed to the female reporter, but some intelligence experts said it’s believed Xinhua is suspected of having links to Chinese spy agencies.