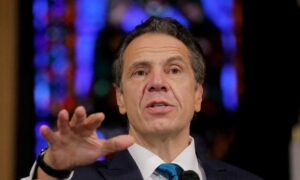 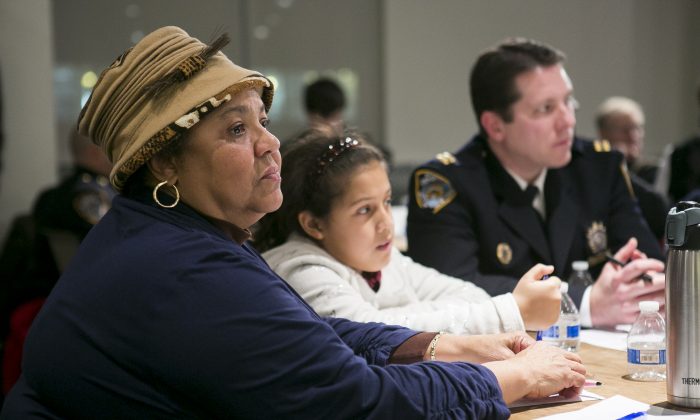 The Rev. Georgette Morgan-Thomas moderates a discussion at her roundtable on how to improve police–community relations, in Washington Heights, Manhattan, on Feb. 2. To her left is Capt. Michael Baker, whom she works closely with. (Samira Bouaou/Epoch Times)
New York

NEW YORK—The Rev. Georgette Morgan-Thomas felt slightly anxious in the police car. She sat up straight and adjusted her straw fedora hat, silently planning how she would duck if they were to encounter an actual violent situation.

It was not easy to volunteer to ride along in police cars in Harlem, something that Morgan-Thomas has been doing periodically in her spare time since 1997.

She recalled how a police officer told her about an incident where they found a decapitated head inside a building in her community, the work of the Jamaican Posse gang.

Yet she and half a dozen leaders in the community, mostly members of the clergy, try to take turns going on ride-alongs once a week to improve police relations in their neighborhood.

The ride-alongs began in the 1980s as a response to the crack epidemic clampdown that caused a rift between the community and police officers in New York, she said.

Reverend John L. Scott said the ride-alongs that occurred 20 years ago in the Bronx “were extremely fruitful.”

In present day, they go on ride-alongs with a renewed mission.

“We are concerned with police morale,” said Morgan-Thomas, chair of Manhattan Community Board 9. “We take turns riding with police officers to show people that the officers are a part of the community.”

We are concerned with police morale. We take turns riding with police officers to show people that the officers are a part of the community.
— The Rev. Morgan-Thomas, chair of Manhattan Community Board 9

That statement might sound strange coming from an African-American woman.

Yet despite the heightened racial tensions of late that arose from the police killings of unarmed black males such as Michael Brown and Eric Garner, many African-American members in Morgan-Thomas’s community agree with her.

The community’s cooperation with local NYPD authorities such as Capt. Michael Baker from the 30th Precinct, shows a rare and hopeful example of how it is possible for an African-American community to develop good relations with the police.

A Close Relationship With the Precinct

A good relationship depends on cooperation from both sides. The captains and other officers of the 26th and 30th precincts make an effort to go to community events such as block parties and small business meetings.

Most importantly, the precinct is approachable.

This was an incident that occurred on 145th Street, when a black male felt he was pulled over without cause and treated disrespectfully. Instead of getting into a confrontation with the officer, he remembered the officer’s badge and called Morgan-Thomas.

“I called the captain on a Saturday and he called me back,” she said. A meeting was set up for Monday morning and the issue was resolved.

“Had he not known we had contact with the precinct, he might have gotten into an unnecessary confrontation,” she said.

If only more areas had such a relationship.

“I see a vastly different situation in another precinct that serves a community I’m also a board member of,” Morgan-Thomas said.

That’s not to say there aren’t community–police tensions in Morgan-Thomas’s neighborhood.

“Not every officer comes to the community with a receptive mindset of collaboration,” she said. “We do have officers that come to our precinct who haven’t learned our system … they come with preconceived biases.”

According to Baker, police officers generally switch precincts every year. They get promotions and are assigned to special units in different neighborhoods. Hence, a neighborhood doesn’t really get to know its patrol officers because they don’t remain in one precinct.

“There’s a void in precincts,” Baker said. “It’s a challenge for us to train new officers.”

During ride-alongs with new officers, volunteers such as Morgan-Thomas give them a tour of their neighborhood and introduce them to members of the community.

“Hopefully, they can see us differently after meeting us,” she said.

She recalls an incident where a police officer saw a young black male standing on a street corner and stopped to question him.

I told him the boy just doesn’t have any work right now. But he’s a good kid. He participated in my summer program.
— The Rev. Morgan-Thomas

“I feel like me being there at that point and time created a certain amount of peace,” she said. “The officer approached him respectfully, and the boy’s response was the same as well.”

“You take 20, 30, 50 cops and you put them in a precinct. Then the first thing you tell them is that it’s a high crime precinct. What’s going to go through their heads?” O’Neill said. “Fear goes 100 miles an hour. But we don’t want that.”

You take 20, 30, 50 cops and you put them in a precinct. Then the first thing you tell them is that it’s a high crime precinct… Fear goes 100 miles an hour.
— James O'Neill, NYPD Chief of Department

Communities are pulling together to find solutions to improve police–community relations.

The residents identified specific problems such as stereotyping, use of force, and the ever-changing officers on patrol in their neighborhood.

They also shared their ideas on practical solutions—more body cameras, education on rights, and the decentralizing of the Civilian Complaint Review Board.

During the idea sharing part, one resident praised Baker’s management of his precinct and pointed to the precinct’s relationship with the community as a model.

When Baker first came to his post in April 2014, residents were initially weary of him because he was white.

“[Now] to me, Baker and [the community affairs officer] are not just some total strangers in the precinct,” said Marisol Alcantara, 42. “That white guy from somewhere is just Baker now. He’s the one whose been marching with us. There’s a human relationship.”

At the forum, NYPD announced a pilot plan that they hoped would replicate good police–community relations.

The pilot plan is set to begin in April, and NYPD plans to expand the program across New York City to fundamentally change the dynamic of police–community relations.

In the pilot plan, officers will be put in designated areas to patrol in Washington Heights and Inwood, both communities just north of Harlem, so that it’s the same officer in the community all the time. This gives officers an opportunity to build relationships.

Many community members said they found it problematic that police officers did not live in the neighborhood they policed. “So you know Maria’s son likes to hang out in the corner but isn’t doing anything wrong,” said Heidi Lopez, a resident who went to forum.

“There will be groups of young men sitting on corner, being loud and over the top sometimes, but they’re just talking about sports,” said Robert Dennis, another resident at the forum. “Officers need to get to know them.”

“The [pilot program] will spread to all precincts in a matter of months,” said Kathleen O’Reilly, the assistant chief commanding officer in northern Manhattan.

“This pilot project is really going to change the pace of policing. Right now, we don’t give officers time to work on community relations,” O’Neill said.

Although NYPD is in the process of figuring out specifics, he said it is possible they will assign more patrol officers to answer all 911 calls in a precinct, instead of working on other specialized units that requires officers to travel between precincts.