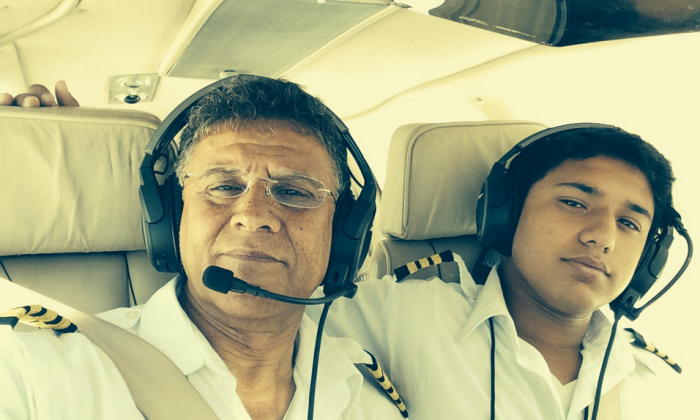 Haris and Babar Suleman in a photo during their journey around the world. Haris is dead after a plane crash while his father has gone missing. (Fly Around the World in 30 Days)
US

Haris and Babar Suleman, who were on a record-setting journey around the world, crashed today in the American Samoa.

Haris was trying to become the youngest person to fly around the world in 30 days at age 17.

The son and father were just days from completing their ambitious journey.

“Before the news breaks, I’d like to thank everyone for their support of my father and brother throughout this trip, as well as for the support given to my mom, brother and myself as we waited for their safe return. Haris and my dad’s plane went down upon take off in American Samoa. Haris has been found–he did not make it,” she said.

“My father has not yet been found. Please pray that my dad is found alive and well. Also, hug your siblings and parents–tell them you love them, a hundred time. A thousand times. It will never feel like it’s been said quite often enough.”

Babar Suleman, (second from left), Haris (middle), and other members of the Suleman family in a file photo. (Facebook)

Haris in a photo from earlier this year. (Facebook)

The Sulemans next to their plane. (GoFundMe)

Babar and Haris in a file photo. (Around the World 4 edu)

A spokeswoman for the family confirmed to the Indy Star that the plane crashed just after taking off from Pago Pago and that Haris’s body was recovered.

The National Transportation Safety Board said that it’s investigating the accident.

The Sulemans were flying a two-seater, single-engine Beech A36 Bonanza aircraft.

Haris, set to be a senior at Plainfield High School in Indiana, had been flying since he was eight years. The journey was in part to raise money for the Citizens Foundation, a nonprofit dedicated to building schools in rural Pakistan.

Suleman had recently gotten his pilot’s license and instrument rating, which allowed him to fly aircraft over oceans.

“I feel like becoming a pilot has changed me a lot,” he said to the Star before embarking on the journey. “It’s really hard to get to a point where you can fly around the world.”

Haris Suleman Dead: Pilot Dies While Trying to Become Youngest Person to Fly Around the World with Father Babar