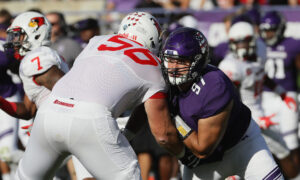 The hot-shooting Hardy, nicknamed “Buckets” by his teammates, hit 9 of his 16 shots overall (including 5-for-9 from 3-point range). The 86 percent free throw shooter also connected on 11 of his 13 charity attempts as St. John’s never trailed in a battle of Big East powers.

The Johnnies jumped out of the gates with an 18–4 run to start the game, highlighted by a pair of Hardy 3-pointers. Just two minutes later, the conference’s fifth leading scorer collected his third trey to restore the St. John’s lead to 25–13, seven minutes into the game, as the contest reached a frenetic pace. It even prompted a leg injury to official Tim Higgins.

The game slowed down after that while the Johnnies kept Villanova at bay the rest of the half, leading 41–36 at the intermission. Wildcats guard, and second leading scorer Corey Stokes kept his team close with a trio of first half 3-pointers.

The second half started with some more Hardy offense as the senior hit an insanely long 3-pointer with the shot clock expiring and then followed that with another 3 off a fast break to give the Red Storm a 47–40 lead. Villanova head coach Jay Wright had to call a timeout.

Wayns finished with 19 points for the Wildcats, while Stokes scored 20, including six 3-pointers.

That would be as close as Villanova would get though as D.J. Kennedy and Dwight Hardy took care of business down the stretch. The Red Storm closed the game on a 16–4 run.

Kennedy finished with 12 points and 14 rebounds for his second straight double-double, helping the Johnnies enjoy a +14 rebounding advantage. Forward Justin Brownlee also had a solid game with 11 points and 8 rebounds, while Paris Horne hit three more 3-pointers, as he inches closer to the school’s career record.

The win was the seventh straight conference victory for the 23rd-ranked Johnnies, the sixth time they’ve beat a ranked team on the season (first time away from home), and it snapped a six-game losing streak to Villanova.

On the other end, the loss was the fourth in the last six games for the Wildcats who saw leading-scorer Corey Fisher suffer through a 1-for-10 shooting game, including misses on all seven of his 3-point attempts.

The Villanova guard suffered a similar fate in his previous game (3-for-16, 0-for-8 shooting against Syracuse) just one game after torching Depaul for 34 points.

The win moves St. John’s temporarily into third place with just two games remaining (versus struggling South Florida and Seton Hall). The Red Storm moved closer to receiving one of the four double-byes in the Big East tournament.

The win also gives head coach Steve Lavin an 8–1 record in the all-important category of games-coached-in-sneakers-and-no-tie, as the once-stylish coach recently revealed his more-oxygen-equals-better-coaching theory.

Whatever the reason, the Red Storm are back.