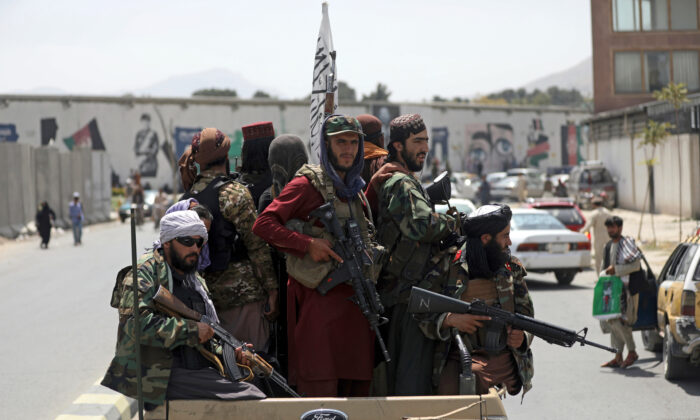 The Taliban has placed security for the Afghan capital, Kabul, in the hands of senior members of the Haqqani Network, which has close ties with foreign jihadist groups including a long-standing association with al-Qaida.

Western intelligence officials say the assignment is alarming and undercuts Taliban promises to tread a more moderate path than the movement did when it ruled the country from 1996 to 2001.

It also raises the prospect of al-Qaida being welcomed back to Afghanistan, they fear, which would break promises made by Taliban leaders during diplomatic talks in Qatar with U.S. officials last year, not to allow the country to again become a safe haven for foreign jihadists.

On Aug. 19, Abdullah Abdullah, chairman of Afghanistan’s National Reconciliation Council, a body of notables and elders involved in the Qatar talks, met with Khalil al-Rahman Haqqani and his entourage in Kabul. Abdullah later indicated publicly that Khalil al-Rahman Haqqani would be overseeing security in the Afghan capital and had provided assurances that he would “work hard to provide the right security for the citizens of Kabul.”

The U.S. Department of the Treasury designated Khalil al-Rahman Haqqani a global terrorist in February 2011, offering a $5 million reward for information leading to his capture.  He’s also included on the United Nations terrorist list.

The meeting between Abdullah and Khalil al-Rahman Haqqani came hours before the Taliban declared the formation of an Islamic Emirate of Afghanistan.

Retired senior British diplomat Ivor Roberts told VOA that assigning members of the Haqqani network to oversee the security of Kabul is akin to the “fox being put in charge of a chicken coop.”

Roberts, a senior adviser at the Counter Extremism Project, a non-profit network that researches extremist groups, said he was surprised at the move. “I thought from the PR point of view, the Taliban was being a bit smarter than that,” he said.

“Instead, they’re putting forward the worst elements of their loose coalition, which sends a terrible signal to women, girls and civil society. And I think it increases the possibility of Afghanistan becoming a breeding ground for international terrorism again.”

He added, “I don’t think they will ever cut ties with al-Qaida. They’re deeply embedded with al-Qaida and always have been.”

In an accord U.S. President Donald Trump struck with the Taliban in February 2020, the group’s leaders agreed to “not allow any of its members, other individuals or groups, including al-Qaida, to use the soil of Afghanistan to threaten the security of the United States and its allies.”

Osama bin Laden, al-Qaida’s founder, directed from his base in Afghanistan the September 2001 terror attacks on New York and Washington, which prompted the U.S.-led invasion of the central Asian country 20 years ago.

On Aug. 15, explaining the reasons for his decision to withdraw U.S. forces from Afghanistan, President Joe Biden noted in a televised address, “We went to Afghanistan almost 20 years ago with clear goals: get those who attacked us on September 11, 2001, and make sure al-Qaida could not use Afghanistan as a base from which to attack us again.”

He added, “We did that. We severely degraded al-Qaida in Afghanistan. We never gave up the hunt for Osama bin Laden, and we got him. That was a decade ago.”

Biden said the terror threat has “metastasized well beyond Afghanistan” and the U.S. has the ability to “conduct effective counterterrorism missions against terrorist groups in multiple countries where we don’t have a permanent military presence. If necessary, we will do the same in Afghanistan.”

The Haqqani Network is considered an offshoot of the Taliban and has more autonomy than other factions within the militant movement, but over the years since its establishment in the 1980s, initially as an anti-Soviet insurgent force with American and Pakistani backing, the network has become more integrated within the Taliban, say counterterrorism experts.

The network’s leader, Sirajuddin Haqqani, is also one of the Taliban’s deputy leaders and is the nephew of Khalil al-Rahman Haqqani, the man now charged with overseeing security in the Afghan capital.

The Haqqani family comes from southeastern Afghanistan, near the border with Pakistan. The network has been accused—or claimed responsibility—for some of the deadliest attacks in Afghanistan, including the 2008 assault on the five-star Serena Hotel in Kabul, the 2012 attack involving a dozen Haqqani fighters wearing suicide vests on a U.S. base in Khost, and the 2017 truck bombing near the German Embassy in Kabul that left 96 people dead. The network is also thought by Western intelligence officials to have been behind the 2008 abduction of American David Rohde, a New York Times reporter who managed to escape eight months into his captivity.

During the uprising against occupying Russian forces in the 1980s, the Haqqani group was the first of the anti-Soviet insurgent groups to welcome foreign Muslim fighters. They included Osama bin Laden, who trained in a Haqqani-run camp. When bin Laden formed al-Qaida in the 1990s, the two groups formed an association and, according to Don Rassler and Vahid Brown, authors of the 2013 book Fountainhead of Jihad, evolved together.

The Haqqani Network and al-Qaida ran joint training camps in Pakistan’s North Waziristan region after the U.S. invasion, and according to author Peter Bergen in the book The Battle for Tora Bora, the Haqqani Network helped bin Laden to escape Afghanistan when American forces were closing in on him in 2001.

The network considered forming a joint unit with al-Qaida this year, according to a U.S. Treasury Department report in January, which highlighted the continuing links between the two groups despite the Taliban assurances to U.S. diplomats in Qatar.

In a five-page memorandum to the Pentagon’s inspector general, the U.S. Treasury said al-Qaida “capitalizes on its relationship with the Taliban through its network of mentors and, who are embedded with the Taliban, providing advice, guidance, and financial support.” It said senior figures of the Haqqani Network “have discussed forming a new joint unit of armed fighters in cooperation with and funded by al-Qaida.”

Taliban officials deny there are any continuing ties with al-Qaida, although they concede there might be residual sympathies.

Ken McCallum, director of Britain’s MI5 intelligence agency, warned last month that while al-Qaida’s infrastructure in Afghanistan had been dismantled, the group might seek to “re-establish some training facilities there.”

Four months after Trump inked his accord last year with the Taliban, a U.N. report to the Security Council said the Taliban had consulted with al-Qaida during negotiations and had “offered guarantees that it would honor their historical ties.”

“Relations between the Taliban, especially the Haqqani Network and al-Qaida remain close, based on friendship, a history of shared struggle, ideological sympathy and intermarriage,” the report said.

Trump had vowed consequences if the Taliban did not uphold their end of the deal.

Asked about a possible al-Qaida resurgence in Afghanistan, U.S. Secretary of State Antony Blinken said Aug. 15 that it is in the “self-interest” of the Taliban not to harbor a terrorist group that wants to harm the West.

“They know what happened the last time they harbored a terrorist group that attacked the United States. It’s not in their self-interest to allow a repeat of that,” Blinken said on NBC’s Meet the Press.