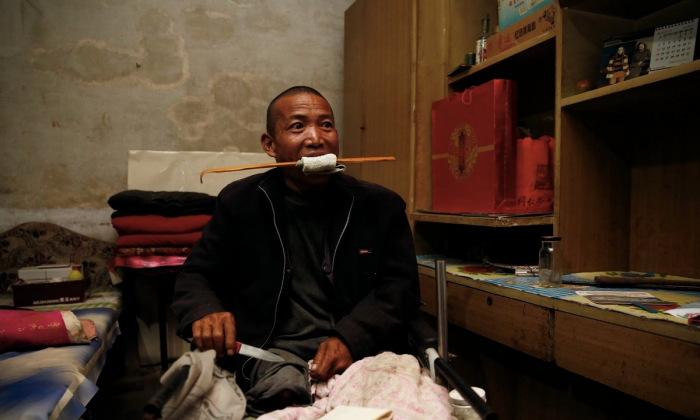 Zheng Yanliang demonstrates how he amputated his leg. (via Netease)
China

The Chinese medical system requires patients to pay up-front, meaning that for hundreds of millions of people, a life-threatening injury or disease can be financially crippling.

Even with insurance, patients and their families still have to foot the bill first and be reimbursed in the future. Faced with such dire costs, many Chinese have opted to skip out on professional treatment, and some have been driven to attempting dangerous and dubious operations on themselves or relatives.

A man in Hebei Province, northern China, who had expended all his savings and was deep in debt from paying for treatments to cure his daughter of aplastic anemia, decided to use a poisonous snake to combat the ailment.

Wang Jingshuai at his home in Hebei Province demonstrating how he used a cobra to cure his daughter. (via Tencent)

Wang Jingshuai, the father, got a cobra imported from the south after hearing of an unconventional treatment method that calls for one toxin to fight off another, online news outlet Tencent reported in January. He had it bite his daughter on the wrist.

Unsurprisingly, the girl, who has been sick since 2011, did not get better from the snakebite. Instead, she began to feel severe discomfort and had to be sent to the hospital immediately.

Twenty-four-year-old Jia Binhui, a man in the southwestern province of Yunnan, could not afford treatment for his leukemia, so he decided to cook himself over red-hot coals to destroy the cancerous cells.

Jia Binhui cooking himself to cure his leukemia. (Sina Weibo)

Jia had leukemia since 2013 and attempted his backyard treatment in April 2015, as detailed in his posts on Sina Weibo, a popular Chinese social media website.

Jia lay down on a set of bamboo poles suspended over his fire in half-hour intervals, resting to tend the flames. His Weibo posts indicated that he would go to the hospital after a few days of “treatment” to see if his method worked.

When Zheng Yanliang, a farmer in Hebei Province with savings worth about 20,000 yuan, found that it would cost 1 million yuan (about $154,000) plus a 300,000 deposit for an attempt to cure his leg condition, he gave up on professional medical services and took a knife and hacksaw to his damaged limbs.

Zheng Yanliang demonstrates how he amputated his leg. (via Netease)

Both of Zheng’s legs were affected with a stroke-like symptom that caused massive clotting and were destroying the limbs, the state-run Global Times reported. This was highly debilitating as he was the breadwinner in his family before being diagnosed with the condition in 2012.

The embolism had progressed to the point that Zheng’s bones were visible and maggots were crawling out of the rotting flesh.

In April 2012, without telling anyone, Zheng bit hard on a towel and spent fifteen minutes sawing off his right leg.

He succeeded in removing his leg, but in the process broke his saw and lost four molars from biting too forcefully on the towel. The next day, his left leg began to separate starting from the ankle.

Zheng’s story received widespread media coverage, and he eventually received enough donations to have him amputate his remaining leg in a Beijing hospital.

Zheng Yanliang at his own home. (via Netease)

In November 2014, villager Wei Shufu from Yunnan set up an herbal medicine bed for his daughter, hoping that the fumes would cure his daughter’s blood disease.

Wei’s daughter was diagnosed with an inherited blood disease in 2013, however, the bone marrow transplant needed for her treatment would have required a 300,000-yuan deposit (about $46,000), with further 50,000 to 60,000 yuan a year for blood transfusions.

The family’s annual income was only 40,000 yuan, as Wei described on his Weibo account.

Lacking alternatives, Wei built a special elevated bed with a variety of herbal plants gathered from nearby mountains as prescribed by a method he found online. The treatment would be carried out by burned a fire under the bed and having the girl lie on it while breathing in the “herbal smoke.”

Wei’s Weibo account was banned on the charge of spreading false information after he posted pictures of the treatment.

Wei Shufu’s daughter lying in the herbal bed made by her father. (via Netease)

Wei Shufu trying to cure his daughter with “herbal smoke.” (via Netease)

Wei tends to the herbal bed. (via Netease)

When all else fails, some Chinese are ready to pay the ultimate price to cover their family’s medical bills.

Yang Gong (pseudonym), a divorced man from Shenzhen in southern China with two children and 170,000 in unpaid debt, found himself in a dilemma when his younger son was diagnosed with bone cancer.

Because he was a migrant worker without officially-recognized residence in Shenzhen, Yang, whose story was reported by Southern Metropolis Daily in October 2015, could not cash in on the state insurance system.

Additionally, his son was his second-born child, in contravention of the then-one-child policy. This barred him from received any insurance benefits at all.

Under immense pressure, Yang committed suicide at his workplace.

This was “a path that I chose for myself,” Yang Gong explained in a series of suicide notes. “I simply don’t have the money. I can’t watch this ordeal drag out endlessly.”

Following his death, authorities sharply reduced the amount Yang’s son would have to pay for treatment given his status as a second child. But the father’s sacrifice could only go so far—even with family members taking debt to support him, the younger Yang still faces over 100,000 yuan of unresolved bills.